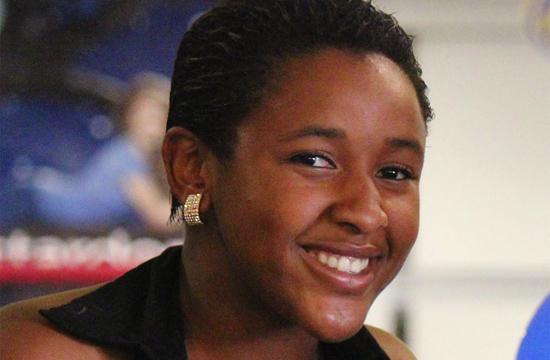 The sun is shining bright on California state champion for girls’ wrestling Jessica Walker, who won multiple honors last week, including the $2,500 Discus Award Scholarship award for her achievements in the areas of athletics, community service, and the arts, putting her on the A-list as a National Scholarship Finalist.

Walker, a junior at Samohi, also received the prestigious Juneteenth scholarship award for her essay titled Wading in the Water during the Juneteenth Celebration at Virginia Park last Saturday as a representative student of Santa Monica High School.

Even as Walker accepts these local and national awards, more could be coming her way soon. So what’s her secret?

“I like entertaining people and performing and that’s what drives me at times,” said Walker in regards to her “attacking” work ethic. “I love winning and that’s why I wrestle and do what I do.”

Walker is gifted as an athlete and she has coupled her hard work ethic in sports with her passion to lead forward, and in doing so she has become a poster child for student athletes, but she admitted that she wasn’t always this way.

“Last year I wasn’t working as hard and slacking off and not taking things seriously so I placed second,” said Walker about her sophomore year attempt to win the State Championship wrestling match. “And that was a wake-up call for me because I knew I could go far if I put in the work.”

In 2012, Walker won at the California state championship for girls’ wrestling.

Walker now has two CIF regional championships under her belt and was the Ocean League Champion for the shot put and discus her freshman year.

Just for the experience, she also went out for Song during her junior year and this offered her the chance to be a type of cheerleader many may have seen at Samohi’s sporting events.

According to Walker, her role as a Song leader was one of “a dancer” and not “a cheerleader that does flips.”

After Song practice, Walker would go to wrestling practice with Head Wrestling Coach Mark Black who worked her hard by having her train with the bigger guys in order to improve her wrestling skills.

Walker noted that her favorite move was the “head in the arm” move, more commonly known as the headlock.

“When you wrestle someone constantly, it gets hard and tiring,” said Walker. “Coach Black would specialize in different moves that he would show me.”

She said this coaching helped “keep my cardio up the entire year.”

“Our strength is in our younger kids with a smattering of older kids,” said Black about his wrestling program.

He noted that Walker was now one of the older kids he expected to be part of the state qualifiers for the Southern Section next year.

As one of the older kids, Walker is making sure to keep winning, by staying in shape following a daily agenda that includes being a vegan, and drinking flax seed oil in smoothies.

“I lost 30 pounds and have cut out carbs,” said Walker about her success in dropping her weight in order to be more competitive in sports. “Every morning I have a protein shake and take vitamins.”

According to Walker, she follows this routine to push herself harder, only quasi happy about her performance at the California state championship where she only scored one point above her rival, junior Maddie Tyrone of Northview High School, to win the title.

Walker wants a better performance in 2013 and she hopes to see Tyrone in the finals next year for a rematch.

Yet even between juggling her sports and studies, Walker finds time to volunteer at the Forte Animal Shelter as well as participate in the Racial Justice Committee Group.

Walker also takes part in the YMCA Youth and Government program and still finds time to mentor “young African American individuals in need of guidance” at the local middle schools.

Reasons she gave for being part of these organizations and helping her society improve its race relations include her wish to learn to “be more accepting of others,” and to experience, “a mock government,” so she can learn leadership skills in order to become a future leader for the city of Santa Monica.