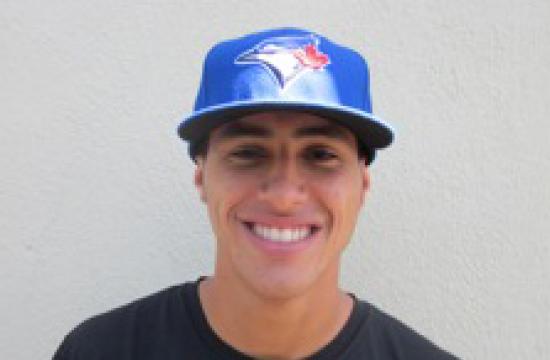 Alonzo Gonzalez has always been tall for his age and at the daunting height of 6”5’, he towers above his teammates and looks even taller while standing on the pitching mound contemplating his next pitch that could be a 91 mph fastball.

Even more frustrating for batters could be that lefty pitchers like Gonzalez make the entire line-up of the opposing team change their strategy, as most pitchers are “righties.”

Concerns Gonzalez used to have, such as being considered “weird” for using a “different side” of his brain while pitching, is a trait that now has recruiters coveting his rare talent and athletic ability.

Gonzalez was recently drafted in the 18th round by the Toronto Blue Jays and his future as a major league baseball player looks strong.

But it has been a long road for Gonzalez to get where he is today.

Gonzalez lost his father at a young age and grew up in a single family home, but this has only pushed him harder and coupled with his love of baseball and a supportive family, the 21-year-old Gonzalez has been inspired to transform his dreams into a reality.

Gonzalez went to Santa Monica High School and on to Loyola Marymount University after receiving a baseball scholarship, but recently transferred to Glendale Community College.

“Any big game situations I was always the go to guy,” said Gonzalez who recently led the Vaqueros to a 2012 Western State Conference Championship. “I always feel like I can go out there and get the job done.”

“When we recruited him from LMU we were excited because his athleticism was unbelievable,” said Vaqueros Head Coach Chris Cicuto. “He really grew into his own and matured and has become a four-year prospect.”

For his role during the 2012 season with the Vaqueros, Gonzalez was awarded second team All-Conference in the Western State Conference.

“I have never played with a such a great group of guys and even though every day was a grind, we all came together and are brothers,” said Gonzalez. “I could never imagine that I could learn so much from a junior college.”

Gonzalez credits his current coaches for his new found inspiration to help him rediscover his “love for baseball” after he left LMU.

“LMU wasn’t what I expected and I didn’t feel comfortable in the environment that I was in, and for me not being excited to go to practice is unheard of and far fetched,” said Gonzalez. “This is what I love to do. I eat, sleep, and breathe baseball and the coaches at Glendale CC taught me how to become a man.”

For somebody who never had a father figure, Gonzalez credits his baseball coaches at Glendale CC for stepping up and filling that role. Gonzalez named Pitching Coach Ivan “Woody” Lopez, Infield Coach Alex Kokol, and LAPD Detective and Outfield Coach Christopher Casey as being strong mentors helping him to develop his pitching talents this past season.

Due in a large part to these junior college coaches, Gonzalez has rediscovered his “no fear attitude” and is now comfortable with his role of “being in control” when he pitches a game.

“Baseball has always been where my heart has been,” said Gonzalez. “And the coaches at Glendale CC really put a lot of things into perspective for me. Their individual input has really made this season of baseball the best season I have ever played.”