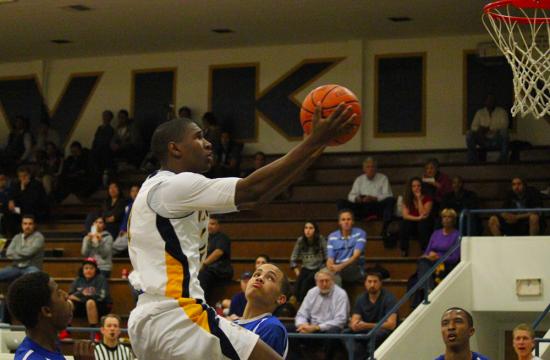 Jordan Mathews, a 6’3” shooting guard from Santa Monica High School, became well known this past 2011-2012 basketball season for his aggressive style of play while attacking the hoop and dominating the court in all categories, so it was no surprise when he was chosen to be the Ocean League’s MVP.

The best thing about Mathews from the viewpoint of a Samohi Viking is that he happens to be a junior and plans on playing basketball for Samohi his senior year.

“We expect big things from him next year,” said Vikings head coach James Hecht. “Throughout the whole process he’s remained humble and focused, and is always looking to improve.”

Mathews averaged 22.4 points a game with a 42-point high and played a large factor in the Vikings Ocean League Championship and advancement to the third round of CIF this past season.

“This season was great and we did well as a team because we had a lot of guys that brought a lot of different things to the table,” Mathews said. “It was a big coming together type thing. At the same time we all had to forfeit something but give what you could to the team for the greater good.”

The excitement Mathews brought to the Vikings home court was reflected inside of the large crowds that gathered. At many times, practically everybody was on their feet cheering.

Others showed their school spirit by painting their faces, but what they all had in common was that they were rooting for the Vikings during games the Vikings frequently won.

But the Vikings got off to a rocky start at the beginning of the season.

“Early in the season Coach Hecht prepared us with a tough non-league schedule,” Mathews said. “After a while we began to know each other, and we understood that if we played hard, no one was really going to beat us unless they had a great game.”

Yet these trials and tribulations coupled with a strong taste of the CIF playoffs has only prepared Mathews to be a leader for his upcoming senior year, and building a solid team around Mathews looks promising.

According to Mathews, the Vikings will have “a balanced scoring attack” next season with a number of lettermen and “good shooters” returning.

“The experience that we gained this year will be invaluable for next year and we have a lot of good pieces,” Mathews said. “And the goal now is to take all those pieces and to put them into a situation where we all can work together to reach a camaraderie and a common goal.”

In the meantime, college recruiters are hounding Mathews and doing their best to woo him to come and play for their schools once he finishes his senior year.

Virginia Commonwealth, San Diego State, Wyoming, Indiana, San Francisco, and Colorado have all offered him full ride scholarships to sign on and play for their teams, according to Mathews.

But he is taking his newly found fame in stride, keeping a level head, and making sure that whatever team he chooses to play for in college is the right one.

“I am taking it all in because I get a lot of new calls every week from a different school,” he said. “Travel Ball is really helping me with all my recruitment and everything, and I’ll make a decision next year when I feel right and am done taking all my visits.”