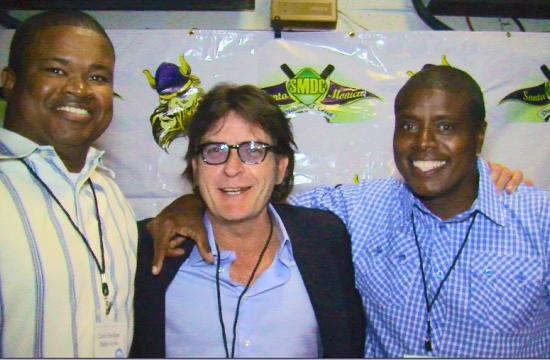 Sheldon Philip-Guide was fired from his position as head baseball coach at Santa Monica High School the day before summer vacation. After two weeks of trying to understand how he could have lost his job, he still doesn’t know why.

Philip-Guide has won two Ocean League titles in three years while coaching at Santa Monica High School. During his first year as head coach, the Vikings finished 15-12 overall tying for the Ocean League Championship with a league record of 8-2, and he was named Ocean League Co-Coach of the Year in 2010.

In the 2012 season, Philip-Guide guided the Vikings to an 8-2 record in the Ocean League going 14-16 overall, but lost to rival Culver City in the first round of the playoffs 1-0.

“We want him back,” said shortstop Mason Landis, a junior at Samohi. “We had our ups and downs, but he wanted the best for everyone. He was a good coach.”

“I really want Coach Sheldon back,” said catcher Leno Lares a junior at Samohi. “I don’t want a new coach to come in and start changing the program.”

Tim Leary, a former Samohi pitcher in the 1970s who played with the Los Angeles Dodgers during their World Series win in 1988, said he was stunned at first.

“The reasoning behind it just seemed fishy,” Leary said.

Philip-Guide believes he was fired after several parents were unhappy with his decision to limit the playing time of a number of seniors during the 2012 baseball season.

“It wasn’t anything personal to any kids,” Philip-Guide said. “I wanted everybody to be successful. The more successful the program, the better it looks for the school.”

Trent Nelson, a senior who shared time in the outfield and was a designated hitter for the team, said Philip-Guide did a good job to split time.

“He did his job to let us play and still get the team that was coming up in there,” Nelson said.

“Honestly, some of the parents should just coach the team if Sheldon does not get his job back,” Todd said. “They all think their kid is the next Ken Griffey Jr., and they’re not.”

“I don’t know what it is with some Santa Monica parents,” Decker said. “They don’t understand that this isn’t little league, and dealing with that administration is a nightmare.”

Todd said Philip-Guide helped to raise about $75,000 in three years for the baseball program due in part to his connections, such as Samohi alumnus and actor Charlie Sheen.

“Sheldon came in able to raise money, and he is great baseball guy and they chase him away,” Decker said. “Since Sheldon has taken over, this is the first time the field has looked really good. The Santa Monica School Board needs to have a backbone and provide leadership for the opportunity to have transparency.”

Mac Mcpherson, grandfather of lefty pitcher Alonzo Gonzalez who played baseball at Samohi in‘09 and was recently drafted by the Blue Jays, said he was very upset with the decision.

“He did more for the baseball team in years,” Mcpherson said. “What I question is the administrator who came in who changed sides.”

The administrator in question is first year Samohi Principal Laurel Fretz who had Vice-Principal Larry Boone call Philip-Guide and fire him over the phone.

Boone admitted that he was “not able to speak about personnel matters,” and Fretz was unavailable for comment.

According to Debra Washington, Assistant Superintendent of Human Resources for the Santa Monica-Malibu Unified School District, said Philip-Guide was “classified but non-merit personnel,” and coaches like Philip-Guide, “can be released at any time.”

SMMUSD Superintendent Sandra Lyon said “this was a school decision not a district decision.”

“A group of parents organized and communicated with Principal Fretz and Athletic Director Daniel Escalera, and they refused to meet with the parents at all, period,” said Jeff Mirkin at a public forum SMMUSD held on the matter on Wednesday evening.

SMMUSD Board Member Oscar De La Torre posed the question of “would it be problematic to have a meeting with parents to explain plans to move forward?”

“We’ll figure out some communication,” said Lyon in response. “It’s hard to give details because it is a personnel matter, but I understand your concerns and frustration.”

According to Pat Armstrong, a Santa Monica resident who was offered the head coaching position at Samohi in 2010, said he would have been paid $2,000 for his services each year, and he turned down the offer citing “low pay” as reasons for not accepting the position.