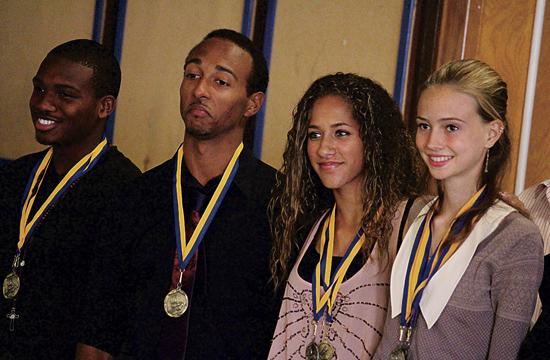 The Santa Monica High School Track and Field coaches honored their athletes who completed the 2012 season, and on Monday night varsity letters, bronze colored medals, and silver trophy bobble-heads were handed out after an Italian-styled pasta dinner.

“I think what’s unique about this team this year is that they are really young basically freshmen and sophomores and they have so much potential,” said Tanya Fischer Head Coach of the Boys and Girls Track and Field team at Santa Monica High School. “For our girls to win and for our guys to get second means they are upholding the program.”

Notables in the Ocean League Girls Varsity Track and Field Finals include:

Sophomore Kloey Battista placed second in the 400m with a time of 56.99.

Junior Zaire Overton won the 1kg Discus with a throw of 96-00.

Junior Franny Pezzulo won the Pole Vault with a vault of 8-4.00.

Notables in the Ocean League Boys Track and Field Finals include:

Junior Peter Breceda placed second with a throw of 122-06.

Senior Riyad Shauk placed second in the High Jump with a 5-04-00 jump.