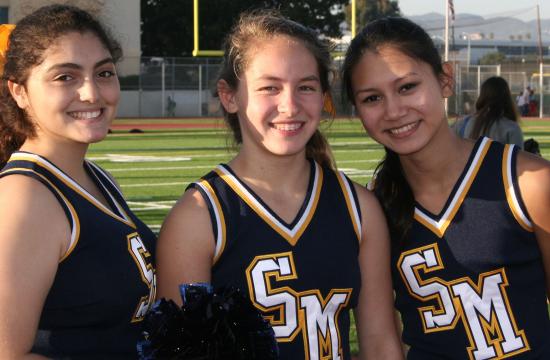 Fifteen-year-old Freshman Madison “Maddy” Tung may look like your typical teenage girl, but she happens to be much more because she’s a cheerleader, a wrestler, a scholar, and an entrepreneur who has started her own babysitting and tutoring business.

To top it off, Tung is a student athlete with a 4.0 grade point average and was chosen by the student body to represent the Freshman Homecoming Court as a Lady.

Recently Tung has been faced with the tough choice of whether to stay with cheerleading or continue wrestling, but she has finally committed to wrestling.

“High school is a time to nail down what you do, so I chose to wrestle,” Tung said. “I’ve been wrestling longer and it’s always been my thing.”

Black believes that with a strong commitment, Tung “might make the Varsity boys team at the lower weights next season.”

Tung will be allowed to compete on the Varsity boys wrestling team if she qualifies.

In Iowa, this co-ed mix caused a problem last year as teenage wrestler Joel Northrop refused to wrestle a girl during a competition accepting the silver rather than compete in the state championship match.

But that is Iowa and this is California.

Legally, Title IX mandates that, “No person in the United States shall, on the basis of sex, be excluded from participation in, be denied the benefits of, or be subjected to discrimination under any education program or activity receiving Federal financial assistance.”

To stay in shape this summer, Tung will be going on beach runs, lifting weights, and attending a wrestling camp.

Tung seems happy about her decision to pursue wrestling rather then continue as a cheerleader.

She said she looked back on her freshman year and was happy the way things turned out and she has no regrets.

“I met a lot of great people and made some really good friends and learned tumbling skills,” she said. “Cheerleading was more fun than I thought it would be and if I hadn’t had to choose and wrestling wasn’t in the picture, I would do cheer.”