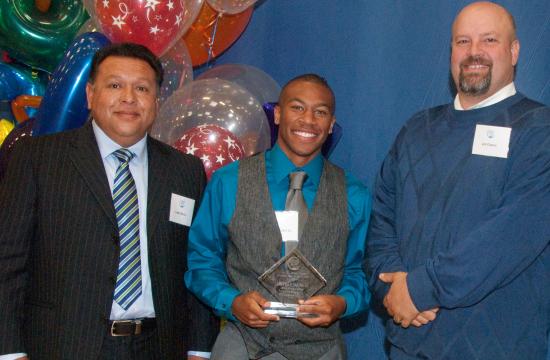 It is the first time SMC has picked an overall Student Athlete of the Year.

Tobin was named one of 15 outstanding SMC students as 2011-12 Student Athletes of the Year in their individual sports, but never before had the college picked an overall winner. All the student athletes were selected for demonstrating scholastic achievement as much as athletic talent and persistence.

The awards to the diverse group of students were presented at the annual awards breakfast sponsored by the SMC General Advisory Board, a community support group.

Tobin, who was named for track and field and is coached by Larry Silva, graduated from high school with honors in the San Francisco Bay area.

He also received the President’s Educational Award for academic excellence as well as the Outstanding Alameda County Scholar Athlete Award.

He was raised by his single mother who instilled in him dedication to hard work, focus on education and resistance to negative pressures in his environment.

He attributes whatever success he has had to, in his words, “the outstanding parenting of my mother and best friend.”

Track and field has been his focus at SMC, aside from academic endeavors and participation in Black Collegians.

He was a State meet qualifier, recognized in the top 20 athletes in both 100 and 200 meters for California Community Colleges, and was No. 2 in both events in the Western States Conference.

With a 3.76 grade point average (just shy of a perfect 4.0), Tobin wants to be the first in his family to graduate from a university. He hopes to transfer to Stanford, UCLA or UC Berkeley and continue to compete in track while studying biomechanics.

He hopes to attend medical school to pursue studies in neuroscience and orthopedics, eventually to be a university or professional team doctor.