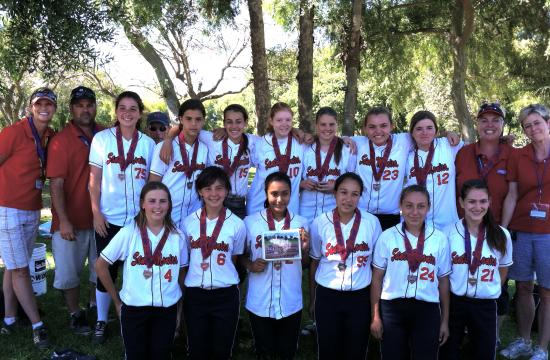 The 14U Santa Monica Girls Softball All Star Team has made it to ASA Nationals — the first time since the team joined ASA in 2006.

The team of 13 girls finished third in their District Championship, 13th in the State Championship, and are now on their way to compete at Nationals in Fort Collins, Colorado, to be held July 31 through August 5.

For years, Santa Monica Bobbysox was dominant in girls softball, but in 2005, the board of directors decided to leave Bobbysox for the ASA (Amateur Softball Association), looking for a more competitive environment.

It was hard in the beginning competing with softball powerhouses, Downey, LaMirada, and Pico Rivera, but in 2010, Santa Monica Girls Softball’s first 12U team, made it through ASA Districts and into State.

The following year, most of the girls returned to the 14U All Star Team, and made State again. This year the 14U team finally made it to Nationals.

There are three girls competing on the 2012 14U All Star Team at Nationals who were on the original 2010 12U All Star team who were the first to compete at State – Makensey Druckman, Sam Hardy, and Sadie Saltzman.

“This trip to Nationals wouldn’t be possible without the constant support of our League, our community, and all the girls who work so hard every day to make there softball dreams, a reality,” the team’s coaches said. “Thank you to everyone who has supported us and Santa Monica Girls Softball.”