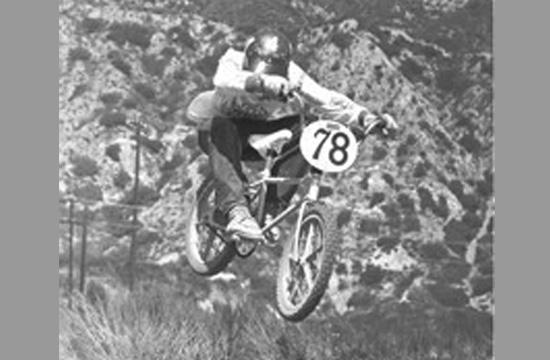 Exposure to this environment led to Palfreyman’s childhood excitement of BMX racing. He and the local boys “pioneered” shaping their own bikes to look like motorcycles in order to race down dirt hills with big jumps, popping tricks in mid-air, and shaping an idea that has developed into what is now known as BMX racing.

Last month, Palfreyman was inducted into the BMX Hall of Fame at an awards ceremony in front of more than 10,000 people at the Olympic Training Center in Chula Vista for a sport initially seen as one for children unable to afford their own motorbike.

But perceptions have changed as many adults, who saw the bike riders as kids who crossed the lines of bike riding, have been rebuffed as a good number of these top “kids” have been recognized as legitimate pioneers of the BMX racing event featured at the X Games today.

Throughout his lifetime, Palfreyman has been part of multiple sports not only with the Dog Town Skateboarders but also as a Santa Monica surfer, a Motorcross legend, and a BMX racer.

“I was known as the most enduring rider at the time and was also the quickest starter,” said Palfreyman about his six years of racing in the BMX world. “My starting techniques were what started the actual race gate for BMX.”

As one of the first test riders for Linn Kastan’s Red Line, Palfreyman appeared in ads for BMX bikes and became a test rider for the Mongoose bike company.

Palfreyman’s notoriety grew throughout the BMX world and he secured his legendary status with a win at the Yamaha Gold Cup in San Francisco in 1976.

“It was a series of three different races in San Diego, San Francisco, and the LA area,” said Palfreyman. “And you had to qualify for one of them. We ended up qualifying for the San Francisco one. I was in 10th place at the beginning of the race and came through the pack and ended up winning on the last jump on the last straightaway to beat ‘Friendly Fred’ the favorite.”

All of the Rick’s Bike Shop riders fed off of each other’s tricks “back in the day” and became forerunners of the BMX racing sport.

According to Palfreyman, his most famous jump was off the Bay Street Cliff in Santa Monica near what the local boys called Cactus Park, and where “all the surfers back in the day used to hang out.”

“A few guys challenged me to jump off the 30 foot high cliff, so I ended up jumping off Big Meal Hill,” said Palfreyman of his “big BMX guy from the city,” stunt. “You never think of it growing up but now many people make a pretty big deal out of it.”

Palfreyman left BMX racing after six years to pursue Sidehack, motorcycle side car bike racing because he “wanted to be better than his father,” and he has since became famous for his involvement in the sport, but he has never forgotten his roots as a BMX racer and always wanted to be included with his friends.

“A lot of these guys stayed in the industry whereas I went on to motorcycle racing,” said Palfreyman. “And I had to wait my turn.”

Now “Snaggletooth” is officially part of the BMX Hall of Fame for bike racing.