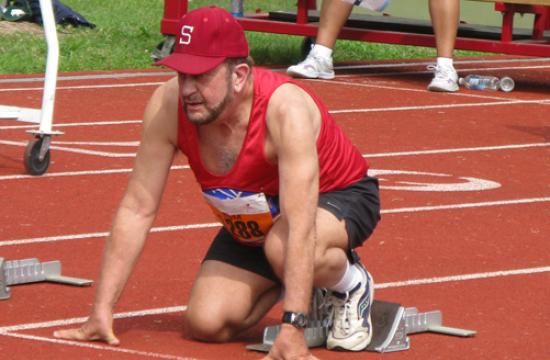 When Tom Elias elected to compete in his first Transplant Games in 1998, just nine months after his life-saving kidney transplant, people asked him how it was possible.

He explained to them: “I was sick then, and I’m not sick anymore.”

This is the mentality of the now 68-year-old Santa Monica resident and Mirror columnist, who is preparing to compete in his eighth Transplant Games of America later this month.

Open to anyone who has undergone a life-saving organ transplant surgery, living donors and donor families participate in what is more than just an athletic event and highlights the importance of organ and tissue donation.

“It’s the only place I ever go where almost everyone has a transplant,” Elias says of the Games’ appeal. “We understand each other. It’s a unique situation, and these are remarkable people.”

Elias notes that the participants of the Games are all “survivor-types,” and that the competition can be tough.

Elias, who will be competing in swimming and track, uses SMC facilities several times a week to train and prepare for the games. In the past, he has won the long jump.

After being diagnosed with polycystic kidney disease in 1989, Elias tried every kind of diet in hopes of controlling the symptoms to avoid further kidney deterioration and possible dialysis and/or transplant.

Several years later, he went into kidney failure and was put on the kidney transplant list while on dialysis, and was on dialysis for six months until his transplant. His wife and son were not a blood type match, and neither was his first cousin. His first cousin’s daughter was, and she donated her kidney.

Elias credits his transplant for not only saving his life, but also for making him feel 30 years younger.

“You get the transplant, and you feel so good. Suddenly you realize how bad you felt before. When you’re living that way, you don’t really understand,” Elias said.

The Transplant Games serve as a testament to the importance of organ donation, Elias says.

“If you want to see the good it does, you look at the people at the transplant games who are basically dead people, if it weren’t for their transplants. All of us would be dead without them. (Donating an organ) is the finest thing a person can do.”

The bi-annual 2012 Transplant Games of America will be held July 28-31 in Grand Rapids, MI.