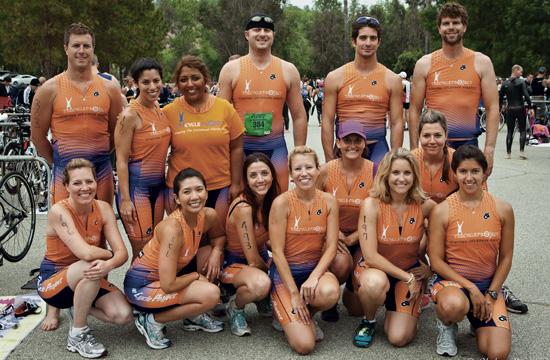 “Do as I say, not as I do” is not the ideal motto to follow. A lot of athletes in Santa Monica and the surrounding region chose to, in fact, disregard said statement and instead lead by example. After all, it is one thing to state and observe that childhood obesity is a growing problem in the United States. It is something entirely different to actually do something about it.

A team of 16 athletes from the region set out to take part in their first triathlon in San Dimas, to raise funds to increase awareness of and education for childhood obesity. Almost two weeks ago, the team completed its first major mission: crossing

the finish line at that San Dimas triathlon on June 10.

Coached by Marina Del Rey-based personal trainer and boot camp instructor Mychael Shannon, the 16 teammates trained for four months together in preparation for the triathlon.

“This is the first event our team has been able to put together,” Shannon, who served as a personal trainer for 13 years, told The Mirror at a local coffee shop in Santa Monica.

It was a team that came together initially to maintain a high level of personal fitness for each of the individual team members. Competing in a triathlon was a great new challenge for all those who signed up for Shannon’s team.

Of course, in working with Shannon in tweaking their own personal workout regimens, each of his teammates found a greater purpose: help The Cycle Project “break the cycle of childhood obesity.”

“This is just a way to lead by example and, also, once we start raising some funds, we can help kids start triathlons,” Shannon said. “The first part of raising awareness comes through adults doing the triathlon and leading by example. After we get enough funds, we can go and sponsor kids and use that money to help them train for triathlons.”

The team’s swim coach, Mikey Flaherty, said synching up her Swim with Heart program with The Cycle Project was a perfect match, both for training the participants for each of the legs of the triathlon and for promoting better health among the younger generations.

“As a non-profit organization that offers year-round swim instruction with a focus on personal connection and the importance of having fun, the Swim with Heart program is all about supporting good causes,” Flaherty said. “Mychael and I have worked together before and once he told me about The Cycle Project, I knew it was a perfect match for us. It was incredible to be a part of this project and we will continue to support Mychael in his efforts to end childhood obesity.”

Part of Shannon’s effort to end childhood obesity is to show, through his teammates, that anything is possible with the right amount of coaching, training, and will.

In working with his teammates these past four months, Shannon explained his methods.

The first month, for example, was basic aerobics training, then a fully intensive three-month training that culminated with 90-minute bike rides at 7 a.m. immediately followed by a 40-minute run. A lot of the training takes place here in Santa Monica as well as in Malibu and Brentwood.

“Generally, we train about five days per week. The first part is getting the legs working, getting the swim technique down, getting the run going. Everything is just nice and easy,” Shannon told The Mirror. “The second month is a lot of speed work (with a lot of interval training). The last phase is strength and power. So we do a lot of hill sets.”

Flaherty elaborated about how many of the athletes progressed since taking part in the June 10 triathlon.

“Over the course of three months, we took athletes who were struggling to swim a lap and coached them to build a steady, strong and efficient freestyle stroke,” she observed. “Now, the athletes that were nervous about doing a 300-meter swim (sprint distance) are so confident that they upgraded to the mile swim (Olympic distance).”

One of the teammates, Jamie Thibault, who proudly finished the triathlon on June 10 said working with Shannon and Flaherty was a great experience.

“Joining The Cycle Project has been one of the best decisions I’ve ever made. Even though I’ve had to conquer some of the biggest challenges both mentally and physically throughout this ride. I’m doing things I never thought I was capable four months ago,” said Thibault.

Shannon is already working to prepare his team for the next triathlon. In fact, he hopes to field a solid group of athletes once every three months to bike, run, and swim in the name of staying fit and fighting childhood obesity.

“I was so proud to see the entire team out there in their official Cycle Project kits,” Shannon observed. “Now we’ll take a couple weeks off and then start getting ready for our next race in September. We’re always looking for new team members and welcome anyone who’s interested. People can sign up at thecycleproject.org. Training starts in a few weeks.”