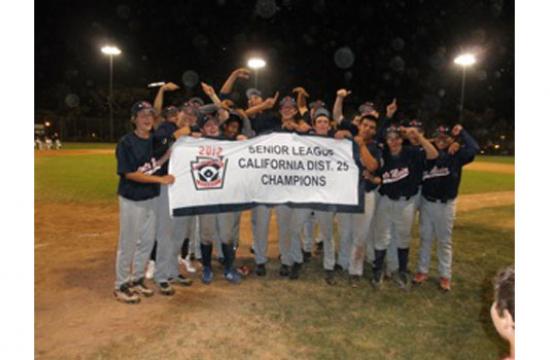 On the road to victory, the team won the opener against the City of Angels 14-0 on July 1. Despite losing the next game to Beverly Hills 3-1 on July 2 , they team rebounded winning four games in four days from the elimination bracket to claim championship.

This path included beating the City of Angels again 8-4 on Saturday, Beverly Hills on Sunday 16-5, North Venice on Monday 6-1, and North Venice again on Tuesday to claim the championship with a score of 7-6.

SMLL trailed 6-4 going into the top of the 7th, and scored three to take the lead, holding on for the win.

Denicio Gonzalez-Drake, Gary Dixon, and Evan Miller were the big, pitching ace was Alex Gironda, who threw a complete game two hitter in the Monday 6-1 victory over North Venice.

Jake Speakman was spectacular behind the plate, picking off two runners in the Tuesday final, killing NV rallies in both cases.

Santa Monica Little League president Matt Steinhaus said most of the players had been part of the SMLL since they were T-ballers, but were all now seniors is the final division of play in SMLL.

“The team is primarily made up of 16-17 year olds, so this is it for little league for pretty much all of them when this experience is over,” Steinhaus said. “None of the kids had ever played in a District final, let alone won a championship. Not only do they win in pretty stunning fashion, but they did so representing SMLL as impressively as any other championship teams I remember, both on and off the field.”

Their next game is this Saturday, July 14 in the Section 4 tournament in Manhattan Beach – the opponent is Lawndale Tri-Park Little League.