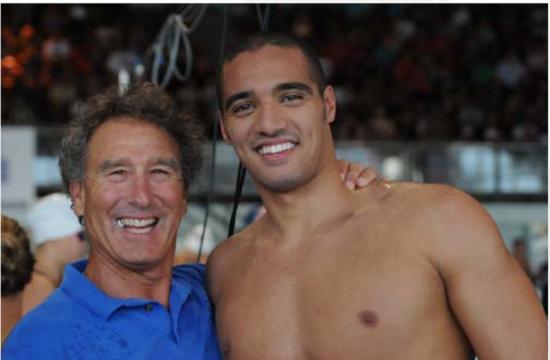 Santa Monica College swimmer Ahmed Mathlouthi is competing in the London Olympic Games for Tunisia in the 200m freestyle.

Mathlouthi was recently named State Athlete of the Year by the California Community College Sports Association.

He hopes to follow in the footsteps of past SMC alum-Olympic medalists including the likes of four-time gold medalist Lenny Krayzelburg and Tommie Smith, a retired kinesiology professor who was a gold medalist in Mexico City in 1968 and also an SMC Sports Hall of Fame inductee.

Here are a selection of former SMC students and coaches who have competed in the Olympics.

Gary Sato (as a coach) attended SMC in 1973-77 before heading on to become an All-American outside hitter at the University of California at Santa Barbara. A distinguished coach, he was the assistant coach of the 1986 World Championship team and the 1987 Pan American Games. He then served as the head coach for the gold-medal win at the 1985 FIVB world cup in Japan and was voted most valuable coach of the tournament. Gary was the assistant coach for the 1988 Olympic Gold medal team in Seoul and in 1992 he coached the Olympic team that won bronze.

Liane Sato (Gary’s sister) attended SMC in 2002, but played collegiate volleyball at San Diego State University. She played professional beach volleyball before joining the 1988 and 1992 USA Olympic Women’s Teams. She was an Olympic bronze medalist at the 1992 games after winning a bronze in the 1990 World Championships.

Lenny Krayzelburg, four-time Olympic gold medalist in swimming. Krayzelburg stroked his way to four Olympic gold medals, three in the 2000 Sydney Games and one in Athens in 2004. While attending SMC from 1992 to 1994, he won three California Junior College Conference Championships under the tutelage of swimming coach Stu Blumkin. Krayzelburg received his bachelor’s degree from USC.

Johnny Gray, four-time track and field Olympian who won a bronze medal in the 1992 Games in Barcelona. Gray’s two-decade career as a competitive sprinter spans four Olympic games, earning him the bronze medal in 1992. He also twice won the gold at the Pan American Games. He still holds the American 800-meter indoor and outdoor records. Gray attended SMC from 1979 through 1980 and graduated from Arizona State University in 1982.

Tommie Smith coached SMC’s track & field teams from 1978 until his retirement in 2005. As a competitive sprinter, he is the only man in track history to hold 11 world records simultaneously. Winner of the gold medal in the 200-meter at the 1968 Olympics in Mexico City, Smith tied or broke 13 world records while a student at San Jose State University in the 1950s. Aside from his coaching, Smith also taught sociology, health and physical education classes while at SMC and served as interim athletic director.