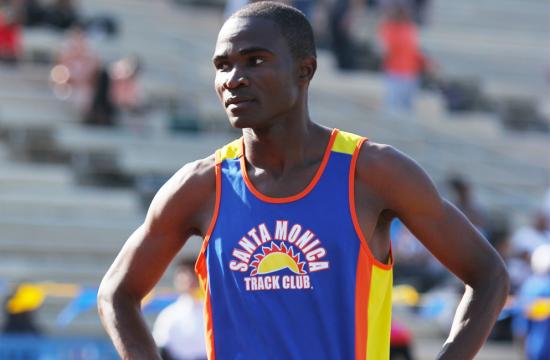 Prince Mumba, an 800m specialist born in the Copper belt of Kitwe, Zambia has been training with the Santa Monica Track Club at Santa Monica College since 2008. After four years of training with legendary Olympic coach Joe Douglas, he is set to run in the Olympics in London this week.

“I want to make it to the finals at the Olympics, that is my goal,” said Mumba who had his first taste of the Olympics in Athens. “Some people think it’s impossible but it’s not. I train so hard and I have faith and I believe in myself and that Coach Douglas will take me where I am supposed to be.”

Mumba, a three time All-American, got his first chance on the world stage in 2002 representing Zambia at the Commonweath Games in Canada where he timed a 1:48.51 in the 800m.

Mumba moved to USA in 2002 after he received a cross-country scholarship to attend Xavier University in Indiana.

He was fortunate enough to be picked up by Oral Roberts University in Tulsa, Oklahoma to secure his shot to compete at the Athens Olympics in 2004 where he timed 1:48.36 in the 800m at the age of 19.

“It was my first Olympics and I just wanted to compete,” Mumba said. “I knew I wasn’t going to make the finals. “

As a child, Mumba dreamed that soccer was going to take him to the Olympics and he had faith that he would one day “be great.”

“You know one day I am going to go to the Olympics,” Mumba said he used to tell his friends, “but they never believed me.”

“One day people were making noise in class and we got punished,” said Mumba about his sixth grade experience. “The punishment was that we had to run two laps around the track. So I was running and everybody was far behind me and the teacher asked me if I was a runner and I said ‘no.’ She said that I should try running, so that is how I started running.”

Mumba continued running at the secondary levels beating all his opponents in Zambia yet he still had to worry about how he was going to pay for his schooling and he realized that he needed money to survive.

People advised Mumba to become a police officer, but Mumba said he wanted to rise higher than that and “ran away” to the United States to become a runner and has now made the Olympics for the second time.

Even with his success reaching the Olympics, the road he has climbed from a poor child in Zambia to a world-class athlete has been due to his determination and commitment to the sport of Track and Field.

“My family was a very poor family,” said Mumba, who is the youngest of 11 children. “I would work so hard to buy myself a uniform and books. I couldn’t get anything from my family to pay for school fees. I had to work so hard to carry heavy stuff. I would ask someone if I could help them carry something or clean their car and hope that I would get money.”

Mumba said his birth was a “mistake.” His mother had him at age 48 and it took her a week to regain consciousness after the birth. Mumba said that when she saw first saw him, she thought that he wasn’t her baby.

“My family originally thought I wasn’t part of the family,” Mumba said. “I was an outcast. I was the black sheep of the family and at one point I didn’t have any place to stay.”

Yet, this Zambian “outcast” carried his nation’s flag at the opening ceremony of the London Olympics last Friday and is now the star of his country.

“It is a dream come true,” said Mumba. “I am happy to contribute to the Santa Monica Track Club and run for Zambia.”

Mumba will compete in the first heat of the 800m at the Olympics in London on Monday.

No doubt he will have his Santa Monica Track Club cheering him on as well as staff and students at Windward High School in the Mar Vista neighborhood where he is currently a track and field coach.