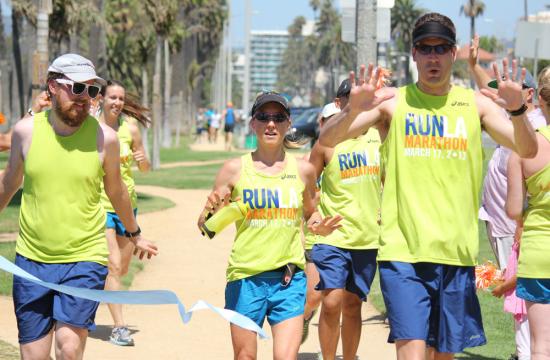 With the 2013 LA Marathon just over six months away, organizers have unveiled a special package for those who want to run their best Marathon yet. And until LA Marathon registration officially opens on October 1, it’s the only way to secure a spot at the starting line on March 17, 2013.

For just $250, runners have access to six months of guided training with LA Roadrunners, along with entry to the 2013 race.

The package price includes a significant discount on the normal $145 cost of the LA Roadrunners program.

“This year’s Olympic Games captured the imagination of millions of athletes and spectators alike,” said Nick Curl, LA Marathon LLC chief operating officer. “Now is the perfect time to commit to run the LA Marathon next spring. Our LA Roadrunners training program will get you ready.”

The six-month LA Roadrunners training program is designed to serve everyone from first-time marathoners to veteran racers.

Program participants can choose from 20 pace groups for runners, walkers and run-walkers that range from those striving to run a sub-3:20 race to those who wish to walk the iconic Stadium to the Sea course in just under the Marathon’s limit of eight hours.

This year, elite ASICS coach Andrew Kastor will lead the LA Roadrunners program and offer inspiration to thousands of marathoners, from first-timers to avid runners.

Kastor has spent 15 years as a competitive runner and trained some of the world’s finest athletes and worked with many renowned coaches.

He is currently involved with some of the world’s best distance runners, including his wife, Olympic Medalist and U.S. Record-Holder Deena Kastor.

“We have an amazing Roadrunners program lined up that will get you outside, active and prepared for next year’s LA Marathon, no matter what shape you are in,” Andrew Kastor said. “Our special LA Roadrunners and LA Marathon package is the first chance you have to sign up and be part of something great in 2013.”

Participants are urged to sign up for the race early either through the LA Roadrunners bundled package available now, or through general registration for the LA Marathon, which opens Oct. 1.

Space will be limited as race organizers are capping registration to ensure each runner has their best possible marathon experience.

Runners can sign up now for the LA Roadrunners + LA Marathon bundled package at www.lamarathon.com.