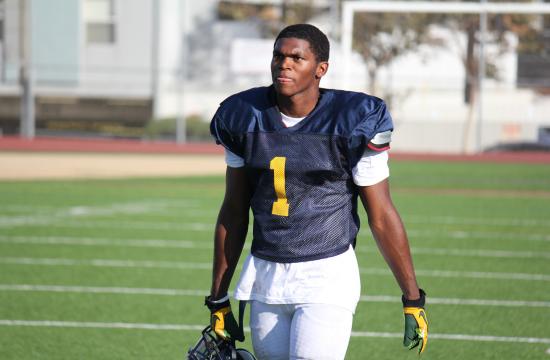 Santa Monica High School’s Sebastian LaRue showed up to watch the Vikings football practice on Tuesday in shorts and a tee shirt after getting a root canal earlier in the day.

Ten minutes into the practice, he begged his dad to go to the car to get his medicine, and within an hour of watching his teammates practice their hitting drills on the field after being marooned on the sidelines of the football field and sitting on a bench, he decided that he had had enough, and ran off the field and into the locker room.

LaRue re-emerged wearing full pads and immediately joined in on the drills being led by Head Coach Travis Clark and began to practice along with the rest of his teammates despite any discomfort he may have had.

By the end of practice, LaRue led every single conditioning sprint and gasser without even a grimace on his face looking the part of a leader for the Vikings on the field remaining calm even before the storm.

Off the field, Clark faces the daunting task of leading the Vikings through heavyweights Mater Dei, Hart, and Valencia before beginning play in the Ocean League.

“We understand our schedule is tough and we have some great opponents,” Clark said. “But we are taking this one step at a time. I got a lot of new guys and a lot of core leaders and I want to make sure that we as a unit are comfortable with ourselves. I think we have put in a lot of great work, the kids have bought in, and I think we have grown.”

The departures have left LaRue to carry on the tradition of being a Viking leader in a football program that only lost two games last season.

“Those guys last year led vocally as well as through their physical work ethic and their mental preparation,” LaRue said. “So this year I am just trying to carry that on and keep it going through everything.”

Clark hopes other leaders will emerge on the Vikings football team and that LaRue will show them the way.

“Sebastian leads by example and he works hardest when he is on the field,” Clark said. “He runs and is always first in line and works hard in the weight room so he is a leader by example and I think the kids love that, it’s contagious.”

LaRue had a stellar junior season in 2011 with nine receiving touchdowns and 11 total for the 2011 season.

He will most likely face double and triple coverage from opponents who will attempt to shut down the Vikings passing game as LaRue looks to score more touchdowns for the Vikings.

“I expect to be double teamed this year but I feel like that shouldn’t stop my production in any way,” LaRue said. “I feel like I should only play better because of the more competition I am going to have.

“I definitely have a goal to surpass all my stats from last year, and I want to increase my production even with the added attention from other teams. I definitely think I should just from the way I have been working in the offseason.”

Yet even as LaRue has been thrust into the position of a leader, he is staying humble even after committing to USC in the off-season and receiving phone calls from Ohio State.

“Ohio State just recently gave me an offer and I am going to take a look at that,” LaRue said. “But as of right now I a fully committed to USC and will be on my way there in a couple of months.”

LaRue deserves his position on the Samohi football team leading every aspect of the Vikings game.

He has no problem playing the role of an outstanding receiver on offense then switching to a menacing defensive back on defense. LaRue even makes sure he places first in every single gasser the coaches make him run with his team at the end of practice.

According to Clark, senior transfer 6’4” high tower Ryan Barbarin will be tossing the ball to LaRue and will start at quarterback for the Vikings today against Redondo Union at Santa Monica College starting at 7 p.m.

“This team is more athletic than the team I played on,” Barbarin said. “And I think we are going to win more this year.”