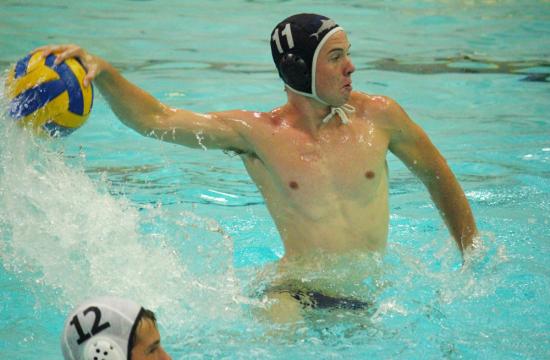 All-League Sophomore Jackson Hauty of the Vikings Waterpolo team at Santa Monica High School prepares to lead an aquatic team this Thursday that will return only three starters, but the team may hold a few surprises from some newcomers that are going to get their first shot playing on the varsity team this season.

“It is going to be a building year for us,” said Vikings Waterpolo Head Coach Matt Flanders. “We lost a lot of seniors last year. But even though our players are young, we have a good starting core of players, and I think we are going to be good for the next couple of years.”

Overall record for the men’s varsity team in 2011 was 10-18. The team placed third in the Ocean League with a record of 4-4 that led them to the first round of the CIF Division III playoffs.

Flanders is looking to rebuild his team this year and improve on the Vikings record with up and comers from his Frosh/Soph team who had an overall record of 23-2 and were Ocean League Champions last year holding a record of 8-0 in 2011.

“We have really focused on the fundamentals passing, shooting, teamwork and have really been cutting out all the plays we used to do and just made it super simple and got back to the basics,” said Flanders. “The guys have been working really hard and are in really good condition, are looking very strong, and ready to go for the season.”

The season looks forward to games against Servite, Palisades High School, and Redondo Union among others before treading into teams from the Ocean League and concluding against Malibu High School.

“I think we got four guys,” said Flanders. “We’ve got our goalie Jack Schwartzman, Jackson Hauty, Matthew Ciafrone, and Robbie Staenberg. Those four guys have committed a lot of time playing club and playing with us for a year or two now and it’s paid off. That will be our core nucleus and they are going to be pretty darn good.”

Hauty said he had the most experience.

“We were on varsity last year and these kids are coming up from Frosh/Soph,” Hauty said.

Flanders also coaches Splashball for youth during the summer at Samohi and knows many of the players including Hauty from his summer camps.

“Jackson has been playing with us in Santa Monica since fifth grade,” said Flanders. “He works so hard to become a great water polo player. He has a great work ethic.”

Lefty shooter Staenberg has played waterpolo with Hauty since middle school on the Santa Monica Water Polo Club and the two have developed a friendship that is reflected in the water.

The pair will be given a chance to lead the Vikings in 2012.

“If you are looking at the goal on the right side of the pool, a lefty has a better angle than a righty,” said Staenberg who is a lefty. “It’s a good advantage.”

“Hopefully I can get some more kids around here to contribute and we will be alright,” said Flanders. “They are young, so really anything is possible.”