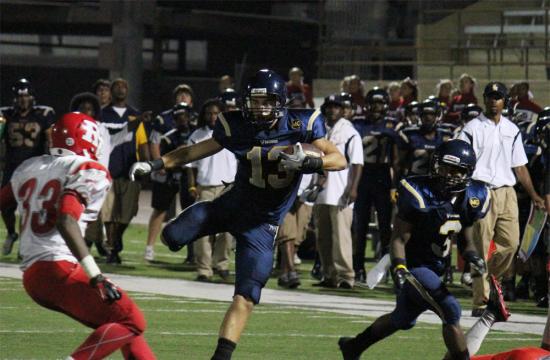 The Santa Monica High School Vikings won their first football game of the season against the Redondo Union Sea Hawks with a definitive score of 42-21 with Vikings receiver Sebastian LaRue catching two of three touchdowns tossed by quarterback Ryan Barbarin during the course of the night.

Barbarin ran for a fourth touchdown.

“My quarterback Ryan Barbarin had an excellent night tonight,” said LaRue. “We made a few mistakes with our defense and our offense, and we got to play a little more disciplined but all in all it was a decent win.”

Running Back Russell Revis scored the first touchdown of the game on an 67 yard rush in the first quarter outmaneuvering Sea Hawks left and right while on his way to the end zone, but the Sea Hawks responded with a short rush of their own soon after driving to the one and then pounding it in to tie the game 7-7.

But that was as close as the Sea Hawks would get as Barbarin connected with wide receiver Jason King on a short corner fade in the end zone on the next drive adding another Viking touchdown.

LaRue nabbed the next touchdown on a small five yard out and added another spectacular one handed grab in the end zone while being clearly interfered by the defender late in the second quarter.

“I thought Barbarin was on the money,” said Vikings Head Coach Travis Clark. “He gave those guys the opportunities to make catches and we knew Sebastian was going to have a lot of attention. Jason King played a hell of a game on the other side.”

All night long the defensive secondary for the Vikings LaRue, King, and Matthew Rusk-Kosa menaced the Sea Hawk receivers effectively shutting down the passing game of the Sea Hawks the entire night.

“Matthew Rusk-Kosa led the league in interceptions last year,” said Clark. “He made a huge play for us tonight, and it’s what we depend on.”

During the third quarter Rusk-Kosa intercepted a pass and ran it back 48 yards for a touchdown to put the game away 42-21.