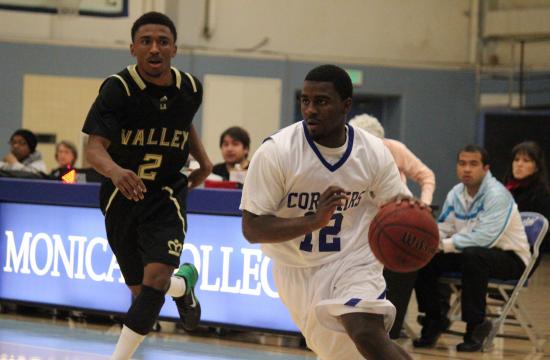 Santa Monica College dynamic duo Lee Lark and Julian Wheeler are both headed to Adam State University in Alamosa, Colorado on full-ride scholarships this fall to continue their hoop dreams in Division II.

Wheeler and Lark led the Corsairs to a winning 2011-2012 season and third place in the Western State Conference with a 15-13 record. Lark made all-conference honors in 2012 averaging 15 points per game and Wheeler was the second leading scorer for the Corsairs scoring 14 points per game.

“It will be an honor to get to play with Julian after knowing each other for so long,” said Lark. “The chemistry and the loyalty we have for each other will give us an advantage, and I am excited to see what we can bring to the team.”

Lark and Wheeler met in 2002 at the age of 11 on a traveling league called “Hoop Sessions.” They were given the opportunity to travel all over the United States playing at a competitive level that taught them discipline, teamwork, and shooting skills.

After two years with Hoop Sessions, the pair parted ways, but formed a close bond that couldn’t be broken even after being separated to play basketball at different high schools.

Wheeler went to Leuzinger High School before heading south to play for Navarro Junior College in Texas. Meanwhile, Lark shone at Dorsey High School and was named to the All-City team prior to playing at Santa Monica College.

After getting caught in a jam with Bulldogs during his first year of junior college, Wheeler found it hard to adjust, and decided to head back to California to be with his friends and family, and reunite with his childhood friend Lark at Santa Monica College.

Prior to Wheeler’s arrival at SMC, Lark led the Corsairs to their first Conference Championship since 1999 and finished the 2010-2011 Season with a record of 10-2.

Lark finished sixth in scoring in the conference averaging 13.6 points per game, and was named one of the top 100 players in the country in community college basketball in 2011.

Lark was ready to return for another successful season at Santa Monica College, but the Corsairs had lost star players A.J Harris, Deshawn Stephens, and Everett Brown to Division 1 schools.

With the arrival of Wheeler, chances for a winning season were made possible and allowed both athletes to shine in the 2011-2012 basketball season with both rising up to take leadership roles on the Corsairs.

“It’s cool that we played together on the first team we ever played on and now we get to finish up our college careers too,” Wheeler said. “It’s going to be fun to play at Adam State with Lee for two more years.”

Wheeler’s arrival this past season allowed both to form a stronger bond and played a factor in their combined scholarships they have been awarded to play at Adams College in the fall.

“I believe they will both have successful careers at Adam State,” said Santa Monica College Men’s Basketball coach Jerome Jenkins. “They both are exceptional players and I’m fully confident they will achieve great things.”

Jenkins said Wheeler was one of the most dedicated and hardest players that he knows.

“Lark is a silent leader who leads by example,” he said. “Their chemistry they have on the court is incredible. They truly know how to feed off of each other.”