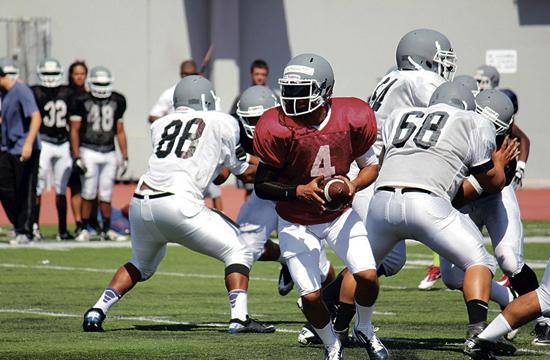 The Santa Monica College Corsairs football team began hitting drills this week, suiting up in full gear for practice, and are working on building momentum in anticipation for their upcoming season that begins Sept. 1 against Mt. San Jacinto.

“Any time you have the returning regional player of the year, one of the top returning quarterbacks who broke the single season record in touchdowns last year, you have a great starting plan,” said Corsairs Head Coach Gifford Lindheim.

Medina averaged 245 yards per game with 2457 total yards and 27 touchdowns during the 10-game 2011-football season, and he is ready to strike a number of talented targets once again.

His first target, wide receiver Mitchell, won the Corsair MVP as a Freshman in 2009 but left the team during the 2010 season after an injury early in the season and did not play in 2011 as he was “focusing on academics,” Mitchell says.

Mitchell hopes to fill the gap left by wide receiver Kris Comas who will not be returning for the 2012 football season due to academic ineligibility.

Wide outs Gordan and Vickers should also emerge as prime targets of Medina.

“Ralph Gordan had an unbelievable offseason,” said Lindheim. “And Carzell Vickers is a 6’5” wideout who is very good and Reggie Mitchell, so with those three guys to start your receiver core is dynamic, and we think it’s a deep group with even a couple other guys could emerge as targets.”

All-purpose running back Johnson is also expected to play a large role in the Corsairs offense both rushing and receiving recording 32 receptions for 256 yards, and leading the Corsairs with 11 touchdowns and 542 yards rushing in 2011.

“Myles is incredible as a running back, as a receiver, and as a character,” said Lindheim. “He’s a winner.”

“We’re going to be pretty good,” said McDaniel. “I’m really excited for this season. I think there is a lot of great energy and we have a great coaching staff.”

“We got a lot of guys that were here last year,” said Brown. “I think our defense is going to be solid.”

“We’re going to shut down some teams,” said Dennis. “That’s our goal every game.”

The only weakness with the Corsairs could be their offensive line after the loss of goliath Alexandru “Cheech” Ceacir to UCLA, but Lindheim assured The Mirror that the rebuilt offensive line would be ready for the season.

“We graduated four of our five offensive line,” said Lindheim. “So that’s a place where we have to rebuild. But the offensive line is one place where we are not very deep so we got to stay healthy there for sure, but that doesn’t mean our performance can’t be high at that position or as deep as some of the other positions.”