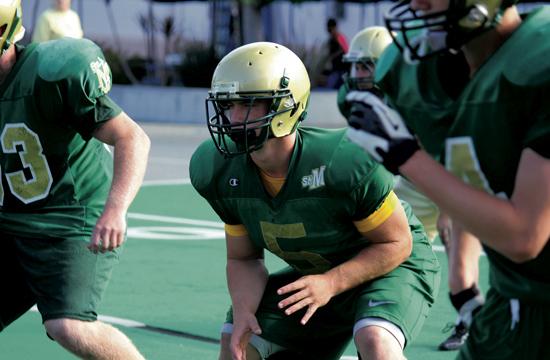 The St. Monica Mariners are back in training and ready for their 2012 football season, which kicks off this Saturday. The No. 10 ranked team hopes to back up their 2011 season where they went 3-1 in league and 7-4 overall.

A horseman trio of returning talented running backs looks to lead the Mariners and will include rushers Kevin Holubowski, Lawrence Major, and Nicolas Pegnato, all who are sure to create a balanced attack led by rifle-armed quarterback tower Luke Cain.

“I feel great about the offense,” said Cain who returns as quarterback and stands at 6’4”. “We have so many key talents with big Kevin in the backfield along with Major and Pegnato, who I hope is coming back soon.”

Pegnato won’t be playing in the first game due to a minor wrist injury, but he is expected to return shortly after. Once he does return, he should be a force deflecting passes on defense as well as adding to the Mariners solid running game.

In the meantime, punishing fullback Holubowski will primarily play running back along with Major, both of whom are sure to augment the passing skills of Cain.

“We are very strong at quarterback with Luke Cain, and a lot of defenders including our entire secondary is returning,” said Guerra. “He will be a compliment to our running backs, Holubowski and Major.”

“He can throw the ball up to seventy yards on the fly, fifty yards while rolling out,” Padilla said.

Padilla believes Cain will be one of the “best quarterbacks to play at St. Monica in the last ten years.”

“We have so many key talents now, and four great wide outs,” Cain said. “I love it.”

With the passing game ready for launch, star rusher Holubowski is preparing for what looks to be a big rushing season.

Last year Holubowski stood at 6’1” weighing 230lb crushing his opponents as a fullback and as a linebacker. This year he has dropped down to a lean 210 pounds and has added muscle cutting his speed from a 4.8 to a 4.6 in the 40.

Holubowski is shooting to do better than his record of 11 touchdowns in 11 games as a junior, and Guerra seems to be facilitating the process by switching Holubowski from full back to running back and looks to focus on using him more on offense.

“This year we are switching me more to offense to keep my legs fresh and we think that I can contribute more on the offensive side of the ball,” said Holubowski, who also played inside linebacker and was on every special team last fall. “I’m going to have fresh legs and I will be able to move faster.”

Guerra is excited for the upcoming season and he believes he can take the Mariners farther into the playoffs then he took them last year.

“We are a very experienced team,” said Guerra. “We just have to max out that talent down the road, and it’s just one of those things we have to get better at as the season goes on.”

The Mariners open their season against Village Christian this Saturday at 7 p.m. at Oaks Christian School.