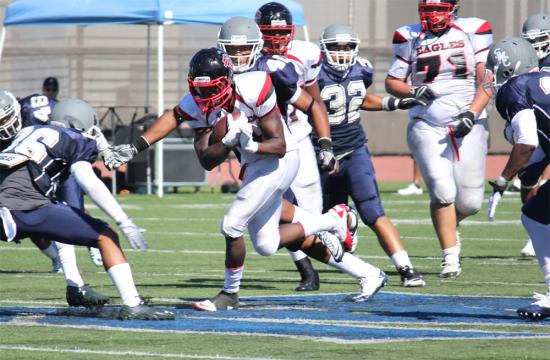 The Santa Monica College Corsairs started off the season leading with the wrong foot forward and everything seemed just a tad off during their first game that cost them a loss to the Mt. San Jacinto Eagles Saturday afternoon at the Corsair Field 31-28.

“It was first game jitters,” said Assistant Head Coach and Defensive Coordinator Steven Garcia. “We made mistakes that are correctable and we will correct them, but the big things that stood out was our inability to get off the box on defense and sustaining the drives on offense to missing some wide-open passes.”

It didn’t help that Corsairs Head Coach Gifford Lindheim was absent due to a one game suspension he was serving after a brawl incident last season during the Pacific Bowl Game against East Los Angeles College.

To make things worse, while the national anthem was playing, the Corsairs ill-timed their pregame warm-up cheer to coincide with the time they should have been paying attention to the “The Star Spangled Banner” national anthem song.

Once the game started, Corsair Quarterback Alfonso Medina didn’t look like the MVP of the Pacific League, and his timing seemed a bit off as he either overthrew many of his receivers or they dropped balls during clutch plays that could have swung the game in a different direction.

But all wasn’t for naught and the Corsairs did have some bright moments that should remind teams that they are legitimate defenders and champions of the Pacific Conference.

Wide Receiver Reggie Mitchell caught a beautiful 40-yard pass from Medina for a touchdown in the first quarter and Myles “Myghty” Johnson had two touchdowns in the game.

Johnson’s first touchdown came on a 25-yard swing pass that sent him scampering into the end zone during the second quarter.

The Corsairs showed a bit of their magic rebounding from a 25-14 deficit to lead the game 28-25 late in the third quarter after Johnson’s five-yard end zone plunge.

On defense, the Corsairs’ Ricardo “Rico” Wright, II had a solid interception and return in the third quarter.

But Eagles Running Back Superior Reed quickly snapped that fairy tale comeback and proved he was too much for the Corsairs defense to handle rushing hard in the third and fourth quarters.

Reed’s 98 yard touchdown in the third quarter, sprung from a dive up the middle, shifted the momentum and game in favor of the Eagles.

The Corsairs next game is away against Chaffey College next Saturday at 6 p.m.