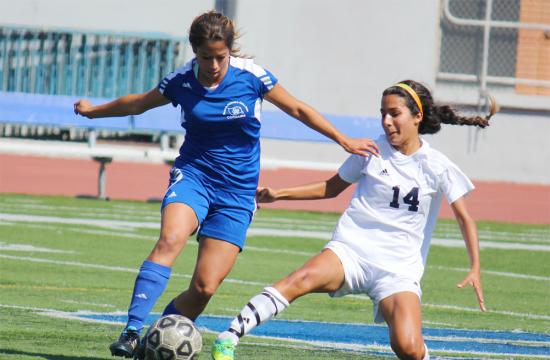 The Santa Monica College Women’s soccer team (3-2-3) lost their first league game on Friday 2-1 to the Citrus College Fighting Owls (6-0-2) at home in a game that wasn’t forgiving for the Corsairs with the game ending on a failed penalty kick by Corsairs Yennifer Baca for a chance to tie the game.

Aaron Benditson, SMC Head Coach of the women’s soccer team, thought the Corsairs had the opportunity to tie up a very good Citrus team.

“We had opportunities to score goals and goals against quality opponents are hard to come by,” said Benditson. “We had the opportunity to get a draw against against a really quality opponent and team that hasn’t lost a game all season long but I was happy with the girls response.”

The Corsairs are part of the Western State South Conference and entered league play last week tying their first game against Canyons and now losing to Citrus to give them a league record of 0-1-1.

Tim Tracey, Head Coach of the Citrus Fighting Owls, thought that the game was a typical Santa Monica Citrus match-up.

“They play very hard and very aggressive and when we had some chances we finished,” said Tracey. “They put us on our heels.”

Julia Wills scored the first goal for the Fighting Owls in the first half and Beth Johnson scored on a penalty kick in the second half to put Citrus up 2-0.

Santa Monica College’s Meg Pierce kicked a straight shot on a penalty kick to sneak the ball past Lozano late in the game to make the score 2-1.

Yennifer Baca had her chance at the end of the game to score on another penalty kick, but Lozano prevented the score.

“They’re good and they pressure hard,” said Tracey. “They deny the opportunity for us to play possession which is good. That’s their game plan and I like it.”

The Corsairs will get their chance at retribution in a couple of weeks at Citrus College when they play the Fighting Owls again on Oct. 23.

Next game for Santa Monica College is at home against West Los Angeles College Tuesday, Oct. 2 at 1 p.m.