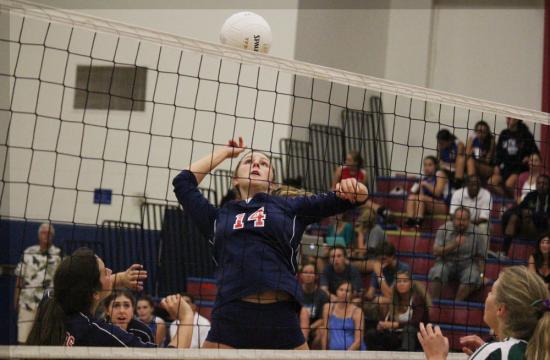 Crossroads just came off a win against St. Paul beating them in the first two sets 24-16 and 26-25 last Saturday, but the fired-up Panthers, whose enthusiasm could be seen on the floor, made things difficult for the Roadrunners to walk away with the win.

Crossroads Volleyball Head Coach David Crist thought the Roadrunners struggled throughout the game against the Panthers.

“The girls had moments of brilliance and really fought hard but we struggled with consistency and ultimately couldn’t come up with the win,” said Crist. “I felt our girls failed to press the advantage when we had it. We had the momentum winning the first very close game and didn’t press that advantage in the end.”

Archer Volleyball Head Coach Jonathan Lotz was excited about his team’s first win over Crossroads in his five years of coaching for the Panthers.

“For us in my five years at Archer High School, we have never beaten Crossroads,” said Lotz. “So to win today is a big step for Archer volleyball as a program.”

Archer made the semi-finals last year and is looking to improve their play this season utilizing the defensive play of libero Lindsey Levesque.

“Lindsey Levesque was All-team CIF last year in a very tough division,” said Lotz. “We keep her in the game all the time because she is the best defender Archer Volleyball has ever had.”

The Roadrunners pounded away at the Panthers early taking advantage of their strong line-up that includes libero Remi Brendlinger who amassed a dig count of 24 with only four errors, outside hitter Olivia Leventhal’s solid serve receive of 16 with seven errors, and middle blocker Zoey Arrastia Prince’s five kills on 12 attempts with two errors.

But that effort wasn’t enough to put the Roadrunners ahead of the Panthers.

Levesque was the key to the success of the Panthers against the Roadrunners and she could be seen diving across the court to make the save and defending with her numerous digs to keep the Panthers alive and ultimately lead Archer to victory over Crossroads.

Next game for Crossroads is away against Campbell Hall Thursday, Sept. 13 at 5:00 p.m.