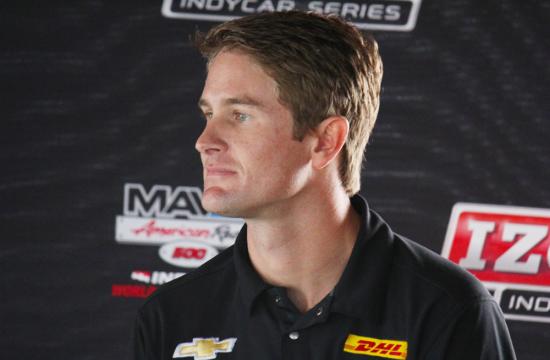 Ryan Hunter-Reay of Andretti Autosport won the IndyCar World Championship Race 2012 on the Auto Club Speedway in Fontana over point leader Will Power of Team Penske placing a respectable fourth in the Saturday race and stealing the crown by a few points from favorite Power.

Hunter-Reay’s performance in the open wheel racing event held throughout the 2012 IndyCar racing season included four wins and 468 points to earn him the title of world champion that included a 1,000,000 dollar prize.

Power, who did not finish the race, crashed and ended his season on the Auto Club track with 465 points placing a disappointing second and handing the crown to a jubilent Hunter-Reay.

Hunter-Reay was hopeful about his chances of winning against Power a few days before the Izod IndyCar World Championship 2012 race even though he entered the championship race trailing 17 points behind Power.

“I had two goose eggs in Ohio and Sonoma so those definitely hurt and we were on our back foot for sure,” said Hunter-Reay. “We knew that to keep our championship hopes alive it was going to come down to Baltimore and that was probably one of the hardest races I have ever driven.”

Hunter-Reay won the Baltimore race and this put him in good standing for the IndyCar World Championship Race 2012 in California.

But due to Power’s crash into a barrier on the Auto Club Speedway, Hunter-Reay’s fourth place finish Saturday was good enough for him to capture the IndyCar cup in 2012 and claim the victory.

Hunter-Reay becomes the first American to win the race since Sam Hornish, Jr. in 2006.