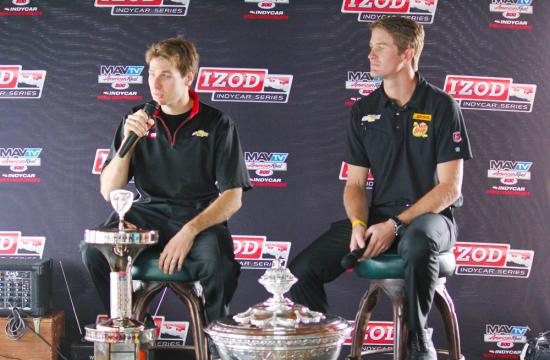 Racing fans are gearing up for season finale of American open-wheel racing featuring the Izod IndyCar World Championship race that returns to California on the D-shaped oval speedway in Fontana re-igniting a popular racing location that has not been used for the event since 2005.

Will Power of Team Penske and Ryan Hunter-Reay of Andretti Autosport are locked in a fierce battle duking it out to win the top prize of a million dollars and the Firestone 2012 World Championship Cup presented to whoever wins the 500 mile race.

This year’s IndyCar series is sponsored by MavTV who looks to bring a good number of Santa Monica racing fans some popular racing entertainment that aims to satisfy those who have a love affair with the sport.

For fans who can’t make the race, NBC Sports Network will begin broadcast the event at 5:30 p.m. (PST).

Racers have accumulated points over the past few months with Australian Power holding a 17-point advantage over American rival Hunter-Reay.

“It is definitely a more competitive season,” said Power. “Everybody is very good.”

Point leader Power is well known not only for his IndyCar racing skills but also for being a contestant in the popular “Dancing with the Stars: All Stars” television series and self described his 2012 racing season as “crude consistency,” losing four out of the last seven races to Hunter-Reay.

“We certainly have a good team this season,” said rival Hunter-Reay. “Winning four out of seven races was a big deal for our team and we put ourselves now in the position to fight for it.”

Third and fourth place contenders Helio Castroneves of Team Penske and Scott Dixon of Target Chip Ganassi will be looking to upset the second place spot currently held by Hunter-Reay.

Upcoming blue chipper light racers Tristan Vautier of France and Esteban Guerrieri of Argentina look to break into the field during their 100 mile race preceding the event with a winner take all sponsorship and a potential contract money to be a professional IndyCar racer.