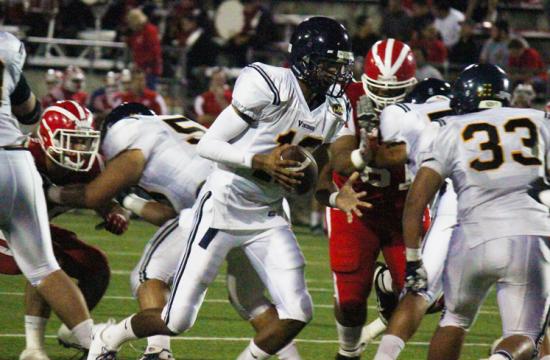 Mater Dei (3-0) shut down the offensive attack of the high-powered Santa Monica High School Vikings (2-1) at the Santa Ana Bowl Thursday in an impressive display of defensive and offensive might that caused the Vikings to crumble by the second quarter of play and ultimately led to their defeat 51-0.

“They played well and we made mistakes and you can’t make mistakes against a good team like that,” said Vikings Head Coach Travis Clark. “They were ready to make plays and we didn’t make plays. We didn’t show up tonight.”

Jameson Field of Mater Dei blocked a punt by Denicio Gonzalez-Drake of the Vikings to start off the Mater Dei offensive juggernaut that quickly scored a one-yard rushing touchdown on a dive by running back Treavon Coley.

Later in the second quarter, Mater Dei quarterback Chase Forest connected with wide receiver Thomas Duarte to put the Monarchs up 14-0 and kicker Tim Strader tacked on a short field goal to end the first half 17-0.

The inability of the Vikings offense to advance the ball soon took its toll on Vikings quarterback Ryan Barbarin, and by the second half he was constantly rushed out of the pocket and forced to make hurried throws that missed key wide out targets Sebastian LaRue and Matthew Rusk-Kosa.

The onslaught of the Monarchs continued and by the end of the third quarter the Monarchs had racked up 38 points and the frustration of Barbarin was clearly evident on the field.

Running back Will Taylor of the Vikings had little room to show off his rushing skills as the Monarchs blew the offensive line of the Vikings off the ball throughout the night forcing the Vikings to consistently go three and out.

Mater Dei capitalized on the frustration of the Vikings in the fourth quarter by adding more points to the scoreboard and then blocking a low punt by Gonzalez-Drake that was picked up by Joey Yglesias who did the honors to run it back for a touchdown to put the game away at 51-0.

“They are a well disciplined club but once we put the pedal to the metal we had it cooking up pretty good,” said Mater Dei Head Coach Bruce Rollinson. “I felt like there was a mismatch all week on both sides of the ball and once they started jamming the box on our inside run game, we got out pretty easily.”