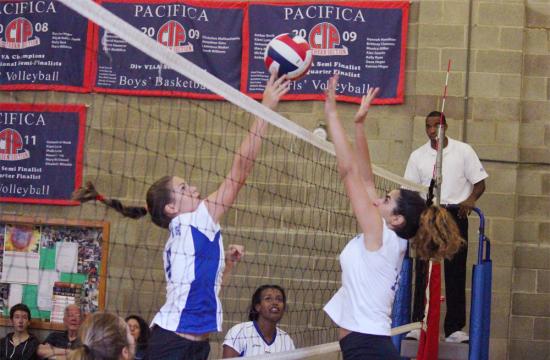 Pacifica Christian Women’s Volleyball (5-0) team were all smiles Monday easily defeating the Holy Martyr Armens in three sets 25-9, 25-13, and 25-11 to advance their winning streak in the Liberty League.

The Seawolves were afforded the opportunity to play many of their younger players during the home game.

“The win went great for us,” said Billy Allen Head Volleyball Coach of the Seawolves. “I thought we played steady the whole time and took care of our side and maintained focus. We had a couple of players step up that haven’t been playing quite as much.”

Middle Blocker Shannen Volpis and libero Maddie Reasner were singled out by Allen as having a solid game.

Standout outside hitter Grace Minchin didn’t play during the game but according to Allen he was letting her rest and recover from previous games.

Koko Kaprielian head coach of the Armens thought his team had a bad game.

Next game for Pacifica Christian is away against Oakwood Thursday, Sept. 27 at 5 p.m.