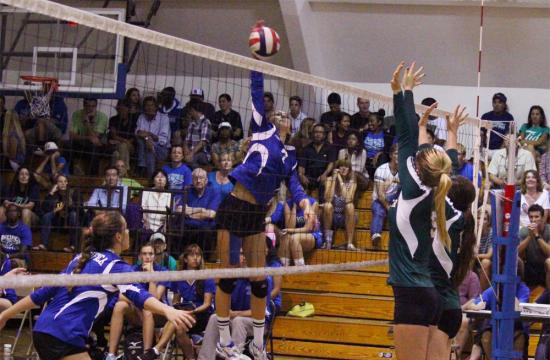 The win secures their spot as one of the top contenders in the CIF Southern Section to date this year for high school girls volleyball.

“Archer played great defense in the first game to make it close,” said Billy Allen Head Coach of the Seawolves. “We made some adjustments and served really well the next two games. Our setter Kiani Lane moved the ball around well.”

The first set was close and Archer had a good three point lead at 10-7 after a solid hit and score by Jessica Culotti but the Seawolves came back to tie the game at 11-11 after Grace Minchen spiked the ball at the net adding a kill for a point.

The Panthers and the Seawolves battled point for point until Pacifica Christian broke away at point 17 to win the first set 25-20.

Pacifica Christian went on to claim the next two sets for the sweep.

Archer Head Coach Jonathan Lotz thought the Panthers played hard but “couldn’t get over their tough serving and strong outside hitters.”

Libero Lindsey Levesque of the Panthers secured 21 digs to keep the Panthers alive adding excitement for the Archer crowd even as Minchen, Lane, and Amber Berck of the Seawolves kept pounding the Panthers with their numerous kills.

Next game for Pacifica Christian is at home against Holy Martyrs Armenian Monday, Sept. 24 5 p.m.

Next game for Archer is away against CAMS at Cal State Dominguez Hills Thursday, Sept. 27 TBD.