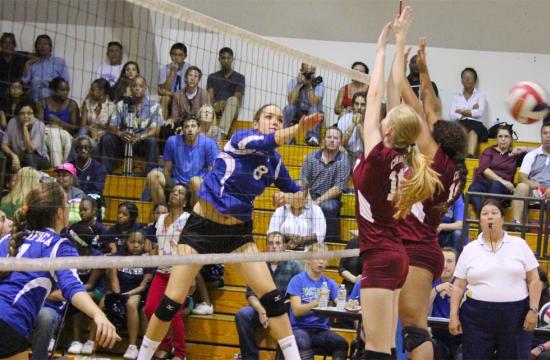 Pacifica Christian (8-0) made short work of Connelly (9-5) in a non-conference match winning three straight sets 25-11, 25-6, and 26-24 with the only scare for the Seawolves coming during set three when the Koalas held their first sustained lead only to be soundly beaten in the end 3-0 at Culver City High School Saturday night.

Billy Allen, head coach of Pacifica Christian’s women’s volleyball team, thought that the first two games were handled well by the Seawolves and was proud that his team was able to win the third game.

“In the third game it was a combination of them playing a lot better and stepping it up and us kind of snoozing a little bit and losing some focus,” said Allen. “But it was a good comeback for us that third game to be down by that much and still be able to salvage that game.”

Allen held true to his strategy of serving tough and staying aggressive against Connelly who is currently 3-0 in their league.

Allen believes that this strategy helped the Seawolves come back from what was initially a 20-14 deficit to win the third game 26-24.

Garry Currier, head women’s volleyball coach for Connelly, rallied to get his girls to come back in the third set even going so far as to receive a yellow card from the referees.

“The first two sets we were learning a new rotation,” said Currier. “So it was all new in the first two games. In the last game the girls came together and they came fired up after I got that yellow card just to show them that I am a part of them and understand that they need to be fired up as a team.”

Confusion on the call emerged when one ref called a four touch that Currier believes should have been a touch off the back because the down ref called it a touch.

“Since the ref said he didn’t see it, I told the ref to open up his eyes and I got a yellow card,” said Currier.

Even though Connelly was up by six points at one time in the third set, the stellar play of Grace Minchin and sisters Gen and Liz Hook rallied the Seawolves back to win.

Currier thought his team played well in the third set but needed to work on finishing.

“I am happy everybody on the team stepped up and played great and got some huge digs against some strong players,” said Currier. “They kind of came out a little bit in the third game but unfortunately we couldn’t finish that match. A couple of balls looked like they were in but the ref called them out. I guess that’s just the way the cookie crumbles.”

Allen reiterated that it was his strategy of aggressiveness that ultimately defeated Connelly.

“If it’s a tight game, some teams kind of play to keep it in and play conservative,” said Allen. “We always teach our girls to stay aggressive serving and attacking because that’s how you win those big ones.”