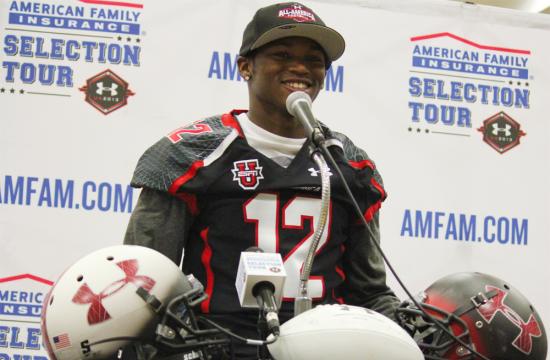 The awards ceremony brought together the Santa Monica and Inglewood communities who recognized the standout wide receiver’s accomplishments on the Vikings football team.

“He deserves it,” said Clark. “We have been working really hard to get him to where he is the last couple of years, and I think he has a bright future in the sport. The kid wants to play at the next level and the next level after that.”

Clark remembers the first moment he saw Sebastian at football practice as a sophomore.

“I knew right away the first time I saw him practice and I saw him run around, I said to myself ‘oh my God we got something special, I just got to hone it in here,’” said Clark. “He was real raw and untamed like a wild colt running around on the plains.”

Sebastian’s road to success has been one of determination and commitment to the sport of football from a very young age.

His father Darryl recounted a time when Sebastian was eight years old and his family drove him to his first football practice and literally pushed him onto the field.

“He started playing Pop Warner seriously when he was 11,” said Dane. “When he was eight years old we brought him out and he did all the conditioning for two weeks, but when they put the pads on and he saw the guys tackling and hitting each other he came over to me and said, ‘mom I can’t do this.’

But according to Sebastian’s grandmother Donesther Dane, once he makes up his mind to go after something, he is driven to make it happen.

“He sets his mind to something and he accomplishes it,” she said. “I remember him telling me when he was little ‘if I want to do it I just do it’ and he always had that kind of drive and determination.”

Sebastian remembers the time his brother Chazz Vickers scored a touchdown for Hawthorne High School and how that defining moment inspired his decision to pursue the sport of football.

“It was Friday night and I was with my mom and my little brother and I had never seen my brother play up to that point,” said Sebastian. “Once I saw him play and run around and make plays and the recognition he got after and during the game, and everybody knew who he was, I knew I wanted that in high school. That’s what drove me to play football. But once I started playing it, it became more than that and it became something that was in me to play this game.”

Clark thinks Sebastian will shine with the rest of the top players in the country when he gets his chance to play in Florida at the All-America game scheduled for 5 p.m. ET on Jan. 4, 2013.

Sebastian believes that the skills taught to him by Clark and the rest of the Vikings coaching staff will not only help him at the All-America game but also wherever he chooses to play college ball.

He is currently committed to play at the University of Southern California on a full football scholarship next fall but that moment is far away.

No matter what college he ends up playing football for, he understands that he’s “not going to be the fastest guy on the field anymore.”

“Hopefully sometimes I am but for the most part a lot of the guys will be on the same playing field as me and that’s where great coaching and technique comes into play,” he said. “I thank my coaches again for preparing me to make plays for the game with the great tools that they have showed me.”

According to Clark good upbringing has shaped Sebastian into the star athlete he is on the Santa Monica Vikings Football team today.