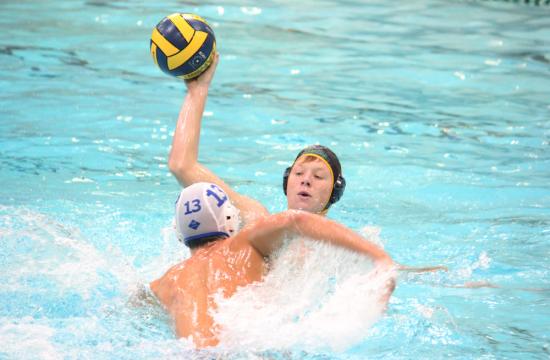 Jackson Hauty, Matthew Ciantrone, and Robbie Staenberg powered the Santa Monica High School waterpolo team to victory in an intense aquatic shoot out against the Palisades Dolphins with the Vikings coming out on top 14-11 on Wednesday.

“We threw a lot of kick outs and had a lot of quality shot opportunities,” said Flanders.

Hauty scored five goals in the game with Ciantrone and Staenberg scoring four goals a piece to power the offensive point tally comprising 13 of 14 total points scored by the Vikings in the game.

“I think Jackson and Robbie had real nice plays offensively,” said Flanders. “And Matthew is one of our best players.”

The Vikings took the initiative in the first and second quarters with Hauty and Ciantrone leading the Vikings scoring three goals a piece. In the third and fourth quarters, the pair combined to add three more goals with lefty shooter Staenberg coming alive to score three points in the third and fourth quarters to add to his one goal in the first quarter.

Even with the win, Flanders thought the defensive play of the Vikings could improve.

“We’re not doing what we need to do on defense,” said Flanders. “We gave up way too many goals and if we fix that, we will be good.”

Anton Pronichenko led the Dolphins scoring three goals in the first two quarters but was shut down in the third and fourth quarters by the Vikings defense and this proved to give the Vikings the edge in the game.

The Vikings play two more home games this week, Thursday against Hoover and Friday against Chadwick both games starting at 3 p.m.