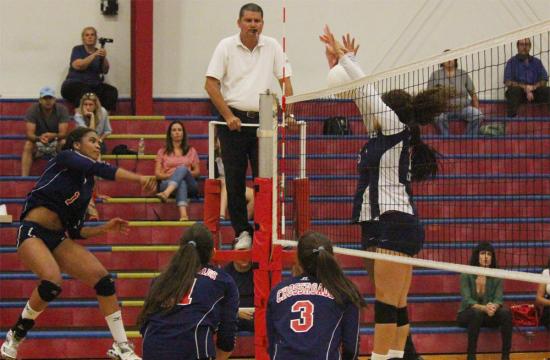 The Sierra Canyon Trailblazers (5-2) ran over the Crossroads Roadrunners (3-4) while attacking with a ferocious firepower to win three straight sets 25-15, 25-21, and 25-8 Tuesday at Grisanti Gym.

Communication errors on the side of the Roadrunners proved to be costly.

Morgan Wijay, Head Volleyball Coach of the Sierra Canyon Trailblazers, thought that Kyra Hill along with the rest of Sierra Canyon’s middles and opposites were able to perform well against the Roadrunners.

“Crossroads has tremendously improved so much since we played them last year and it was competitive but our girls have more firepower in all elements,” said Wijay. “It’s kind of one of those things where the entire team is attacking at you and you are not just stopping one girl but you have to stop a bunch of hitters so it’s kind of difficult.”

Crossroads Volleyball Head Coach David Crist thought that the Trailblazers hit hard over the blocks of the Roadrunners and added points that were difficult to defend.

“We came up against a team that served very well and pushed us on our serve receive,” said Crist. “But I think our defense came up amazing because this is one of the better offenses we have come up against. We came so close in the second game and the girls came so close and if they keep playing like that, we will come up with some wins.”

Next game for Crossroads is at home against Milken Friday 5 p.m.