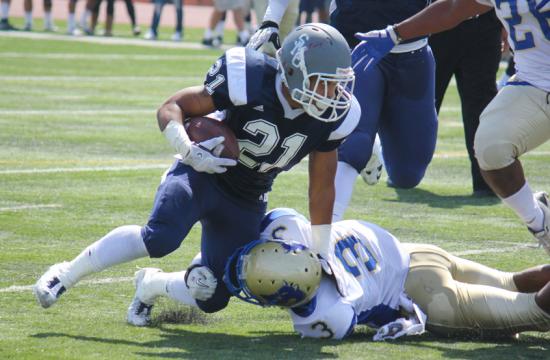 Santa Monica College (3-1) caged the West Los Angeles Wildcats (1-2) during their first conference game of the season in a commanding game where the Corsairs showed sparks of brilliance while whittling down the Wildcats to win the game 31-21.

Santa Monica College Head Coach Gifford Lindheim thought the Corsairs could have played better even with the solid win over the Wildcats.

“We are a work in progress,” said Lindheim. “I feel like we are still able to play a lot better but we are still making mistakes even though we are a talented group. We need to play cleaner football and keep getting better every week if we want to reach our goal.”

“We came out with a game plan and we executed it,” said Medina. “We do what it takes to win.”

First drive of the game the Corsairs snapped to life scoring on a four yard corner pass from Medina to tight end Dominiq Bierria after kick off returner Jaylin Hampton gave the Corsairs excellent field position on the Wildcats 35 yard line.

West Los Angeles responded in the second quarter with an eight play 73 yard drive that resulted in a 16 yard aerial touchdown from Wildcats quarterback Dallas Lopez to Hakeem McGrew.

The Corsairs went ahead with their hurry up offense during their two-minute drill right before the half with Medina orchestrating a beautiful 77 yard drive that culminated when Medina found wide receiver Reggie Mitchell open for a 17 yard touchdown to put Santa Monica College up 14-7.

Even though SMC running back Myles Johnson didn’t find the end zone against the Wildcats, he piled up 112 yards on 18 carries with a long rush of 29 yards in the third quarter that resulted in kicker Jose Esquivel’s field goal to make the game 17-7.

“I was just trying to score and get to the endzone,” said Johnson. “I saw a lot of green in front of me and my line blocked and I was able to get into the open field and try to make some people miss.”

SMC running back Aaron Jones found the endzone a few drives later on a one yard dive after a punt by the Wildcats advanced the football the total distance of half a yard to give the Corsairs excellent field position at the Wildcat 28.

By the time the fourth quarter rolled around the Corsairs were ahead 24-7.

The Wildcats scored two touchdowns in the fourth quarter to keep the game interesting but Bierria’s 24 yard touchdown reception from Medina with 5:29 left in the game put the score out of reach and handed the Corsairs the win.

The Corsairs play their next game away at Glendale Saturday, Sept. 29 at 6 p.m.