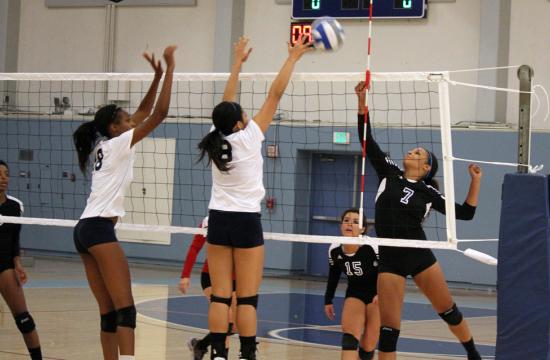 The Santa Monica College women’s volleyball team played their first game against El Camino but were overpowered by the Warriors and ended up losing three straight sets 25-9, 25-18, and 25-22.

The Warriors placed third at the CCCAA State Championships in 2011.

Head Coach Nicole Ryan was satisfied with her team’s effort and fight for their opening match of the year.

“This was great learning experience for Lady’s tonight and gave us beat on where we are as team thus far,” said Ryan.

In the second set, the Corsairs picked up the intensity and kept it close with a 7-7 tie before being over powered by El Camino twin towers Nigeria Owens and Tarryn Luafalemana.

The Corsairs continued to battle and began to rally leading 10-6 midway through the third set but couldn’t hold onto the win.

The Lady Corsairs next match is a doubleheader at home against East LA Sept. 8 at 9 a.m and against Allan Hancock at 12 p.m.