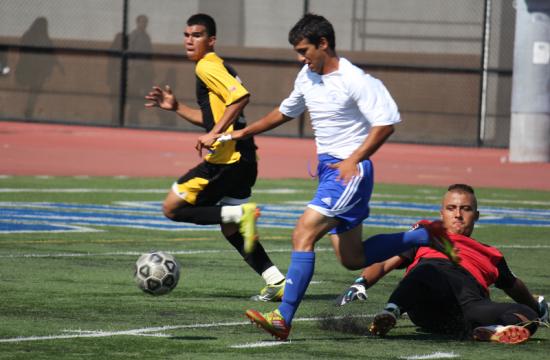 Freshman mid-fielder Luis Fuentes helped lead the Corsairs (2-0) to their second straight victory in the 2012 fall soccer season scoring two goals to lift the Santa Monica College Men’s Soccer team to victory over the College of the Desert Roadrunners 3-1.

“We had a lot of pressure on them early on and we had opportunities to score more goals,” Pierce said. “It just did not come and in soccer if you are up 2-0 and in control of the game one goal could swing momentum, but we were able to lock it down with our defense.”

The Corsairs controlled the tempo of the game scoring two goals within the first fifteen minutes of play.

Fuentes scored his first goal of the game and second goal of the season on a pass down the center to put the Corsairs up 1-0 in the 6th minute of play in the first half.

The offense for the Corsairs continued their attack when Eric Fakhourian knocked in another goal eight minutes later.

Andres Gutierrez of the Roadrunners cut the lead of the Corsairs in the 35th minute with a goal to make the score 2-1.

Kevin Alonzo, the goalkeeper of the Corsairs, made an incredible save right before the half and stopped a shot taken by Gabriel Briceno of the Roadrunners to keep the Corsairs up 2-1 at the half.

In the second half, the Corsairs defensive line along with Alonzo stepped up the heat and kept the Roadrunners from scoring any more goals.

The offense of the Corsairs kept shooting away at goalkeeper Derek Jimenez with Alesandro Canale barely missing a goal with a diving header.

But it was Fuentes that sealed the victory for the Corsairs when he came in running from the center to score his second goal of the game to give the Corsairs a 3-1 advantage in the 84th minute.

“I’m just very happy that everyday we are playing better as a team after all of the hard work we put into our practices,” said Fuentes.

Pierce looks to improve as the season goes into conference play.

“We are taking it one game at a time and we haven’t even gotten to league season yet,” said Pierce. “We are going to go out there and try to win every game. With each game we play, I look to improve.”

The next game for the Corsairs is away in a non-conference game against Victor Valley on Friday, Sept. 7 at 4 p.m.