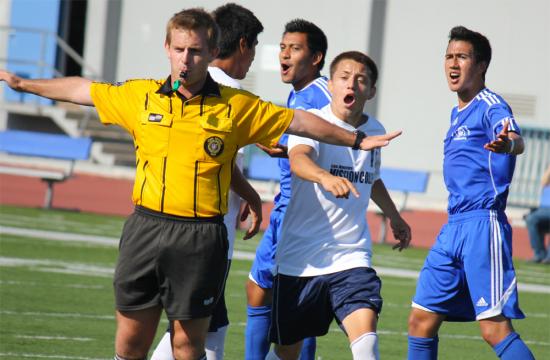 The winning streak for the Corsairs (6-1-2) has come to an end with their first loss of the season at home 3-2 against Los Angeles Mission College (5-3-1). The loss could have been averted if an off side call against the Corsairs hadn’t swung the momentum of the game in favor of the Eagles.

“We took a defender out and pushed another forward up at the the very end of the game but we were not able to come from behind,” said SMC’s head soccer coach Tim Pierce. “These two teams were good teams going at it in an energetic game.”

The Corsairs started strong scoring the first goal of the game in the the 8th minute of play on a pass from midfielder Eric Fakhourian to forward Alesandro Canale who scored down the middle to give the Corsairs a 1-0 lead.

The offense for the Corsairs created an opportunity in the 40th minute with a shot down the middle by forward Rafael Silva but it was blocked by the Eagles goal keeper Elmer Avilar.

Silva was in position to take another shot but it was also deflected by Avilar again and Corsairs Ricardo Ocampo was right there to shoot the ball in the goal but the point was nullified due to an offside call on the Corsairs.

The Eagles came storming back when Freshman Fabian Garcia broke away from the Corsairs defense and shot down the center to score a goal to tie the game 1-1 just before halftime.

In the 65th minute, the Eagles answered with another goal when Marlon Chavarria received a pass from Mauricio Cortez in the middle of the field to give the Eagles their first lead of the game 2-1.

Three-minutes later the Eagles continued to attack and took a comfortable lead when Garcia scored his second goal of the game to bring LA Mission up 3-1.

The game didn’t seem to be over for the Corsairs as they scored four minutes later off a pass from Canale to Silva who shot a powerful goal to set the game at 2-3.

The Corsairs continued to pressure on offense and created a couple plays but just fell short of tying it up as time wound down with the final whistle blow handing the Corsairs their first loss to the Eagles 3-2.

Pierce was proud of the way the team fought back in the second have being down two goals.

“Our team has come from behind several times this season,” said Pierce. “We have a never say die attitude and we were down by two but we scored one goal to bring it back within one. We were fighting to the very end.”

The next game for the SMC Corsairs Men’s soccer team will be at home against Santa Barbara City College Tuesday at 3 p.m.