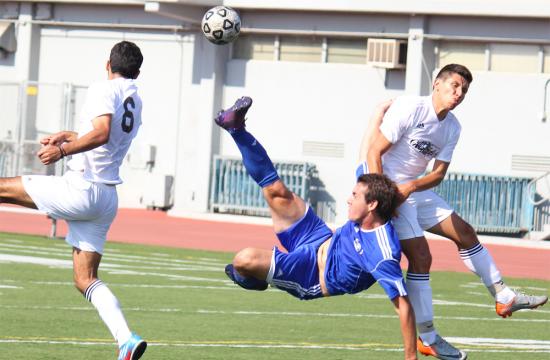 Excitement has returned for men’s soccer at Santa Monica College with the Corsairs (6-0-2) remaining undefeated with their electrifying win 4-0 over the Glendale College Vaqueros (0-5-1) at home Tuesday afternoon.

Forward midfielder Alesandro Canale scored two goals against the Vaqueros in a game that had both teams digging into each other throughout the game culminating with a victory for the Corsairs.

“I think the key thing is that we scored the goal in the first half,” said SMC’s head soccer coach Tim Pierce. “They were making it difficult for us to score but we earned a free kick right before the end of the half and Alesandro scored a beautiful goal on a free kick.”

In the second half, the Corsairs regrouped with Canale immediately scoring another goal to put SMC up 2-0.

Pierce believes that it was the strategy change of the Vaqueros in the second half that led to the win for the Corsairs.

“In the second half, they were they were already down 1-0 so they had to try some different tactics,” said Pierce. “They had to kind of come at us and it opened them up a little bit. We were able to attack them to get an early goal right away and it was smooth sailing from then.”

Canale felt confident that he could score against the Vaqueros after his first goal.

“The second goal was a great ball in from Eric [Fakhourian] and the ball was played down the line,” said Canale. “He put in the early cross when I was in the back post and I was able to volley it to the back of the net to put us up 2-0.”

Midfielder Luis Fuentes scored the third goal for the Corsairs with a beautiful backwards header and Alejandro Umana knocked in the fourth goal near the end of the game with a shot behind Glendale goal keeper Julian Ortega to put the final score at 4-0.

Next game for the SMC Corsairs Men’s Soccer team is at home against LA Mission Friday at 3:00 p.m.