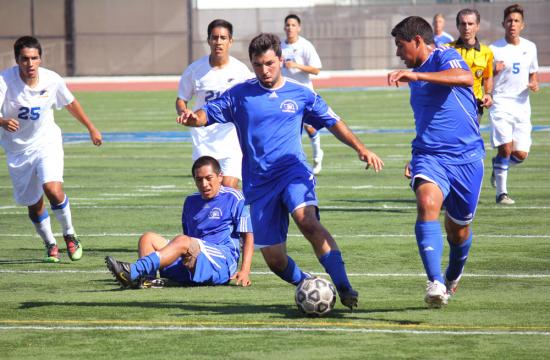 Santa Monica College Men’s Soccer team played and won their first game in the Western States Conference in nearly a decade against the Santiago Canyon Hawks at home on the Corsair field winning by a score of 3-1.

Head Coach Tim Pierce of the Santa Monica College Men’s Soccer team was proud of the way the team performed and was happy to come away with the victory after a decade of suspension from competitive play.

“It was our first game together playing as a team where the Hawks have played a scrimmage game and another game under their belt,” said Pierce. “Plus, they have a roster of returning players. We showed that we could keep up with them.”

The Corsairs came out strong and scored in the 9th minute of the game with a breakaway goal by Sam Medina.

“It was good to get that early goal because it gave the team confidence and it showed that we could play,” said Pierce.

Hawks mid-fielder Christian Perez answered back firing two shots with his first attempt sailing wide and his second aimed straight at the goal, but Corsairs goalie Kevin Alonzo set the tone early with a save.

In the 33rd minute, the Hawks counter-attacked again this time with Rafi Balikcioglu who scored the Hawks first goal.

The game stayed close as both teams stepped up play defensively with the score tied 1-1 at the end of the first half.

The Corsairs regrouped at the start of the second half and came out attacking.

Alesandro Canale scored the second goal for the Corsairs in the 50th minute.

A slight scare for the Corsairs came when Fredy Salguero did a back kick sending the soccer ball in the direction of his own goal almost causing an error with an auto-goal, but goalie Alonzo made a diving save to keep the Corsairs in the lead.

The Corsairs improved their performance as the game progressed with Rayanne Bouarroudj scoring in the 60th minute on a successful drive that cut the Hawks defenses with a drive down the middle before making an incredible pass to the left side to give Eric Fakhourian a shot that gave the Corsairs a 3-1 lead.

The Corsairs went on to win their first game of the season and their first in over a decade.

“Everyone was really anxious about playing because it was our first game of the season but we played well and deserve the win,” said Fakhourian. “The coach stressed about how much we needed to win this game and we were successful because of all the hard training we did over the last couple months.”

Pierce believes that there is a good soccer culture base in Santa Monica.

“I think there is a descent soccer culture here in the community of Santa Monica,” said Pierce. “We finally have a team here and people who want to support it.”

This is the first season for men’s soccer at Santa Monica College in nearly ten years after being expelled for violation of Title IX. A growing number of students had expressed interest in playing for the school and now that interest has finally become a reality with the reformation of men’s soccer at SMC.

Next game is a non-conference match at home against Desert College on Tuesday, September 4th at 3 p.m.