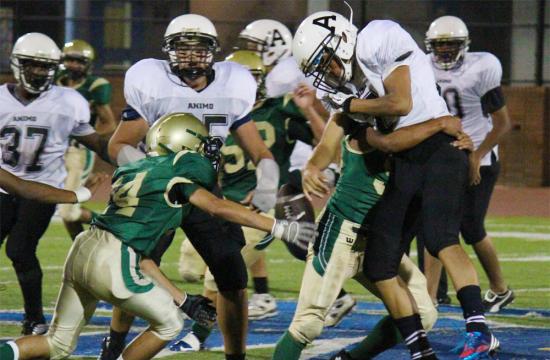 The St. Monica Mariners (4-2) shut out the Animo Inglewood Aztec Eagles (0-6) 56-0 in front of their homecoming crowd at Santa Monica College scoring 35 points the first quarter alone in a lopsided game that sent quarterback Lucas Dretska, running backs Kevin Holubowski and Nicolas Pegnato, and receiver J.P. Kaczor to the sidelines early in the second quarter.

Mariners Head Football Coach Adam Guerra thought it was a good game for the younger players to get the opportunity to play in front of their parents and friends after the first stringers racked up 42 points by the beginning of the second quarter.

“It was a solid win and I think we executed at a high level,” said Guerra. “Some good things happened in the run game and defensively we looked sharp which is what we need to do heading into league. It was good to see the young guys, non-starters, executing our offense like they have practiced week in and week out.”

Guerra thinks that giving his younger players a good amount of playing time will help the Mariners when they start playing games next week in a league that includes teams St. Genevieve, St. Anthony, Salesian, and Bellarmine-Jefferson.

“When you get the second, third, and fourth stringers out there and they are lining up right and they are playing hard and are in the right defense, that’s a good sign that we are building the right depth,” said Guerra.

Holubowski scored the first touchdown of the game on a one-yard dive after being set up by a 55-yard kickoff return by Kaczor his solid 13-yard rush on the previous play.

Animo quarterback Adam Parada was quickly picked off by Kaczor on Animo’s first drive to set up Pegnato’s six-yard rushing touchdown to make the score 14-0.

The Aztec Eagles punted on their next possession and Kaczor did the honors to return it to the one yard line that led to an eight-yard touchdown by Holobowski to push the score to 21-0.

Kaczor finally got his chance to score on the Aztec Eagles next possession returning an interception for a 48-yard touchdown to make the game 28-0.

Then defensive back David Araujo picked off Parada on Animo’s following possession and ran it back for a 40-yard touchdown to make the game 35-0 before time expired in the first quarter.

Melvin Wilson returned a 47-yard punt early in the second quarter to make the game 42-0 and Jason Thomas ran for a 40-yard touchdown to put the Mariners up 49-0 by the half.

Mercy rules kept the clock running non-stop for the third and fourth quarters of play and this made the game quickly come to an end in the second half but not before Mariners back-up quarterback Chris Henderson got his chance to score a four-yard touchdown on fourth down before time expired in the fourth quarter to put the game away 56-0.

Next game for the Mariners is a league game at home on the Corsair field against St. Genevieve at 7:00 p.m.