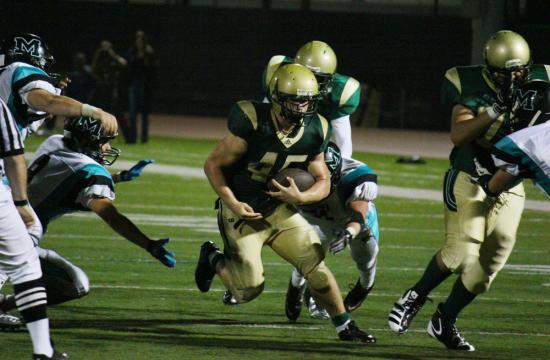 St. Monica’s running back Kevin Holubowski piled up 267 yards rushing Saturday night off of 40 carries netting an average of 6.7 yards a carry to power the Mariners (1-1) offensive engine as they successfully defended themselves against a tight band of Malibu High School Sharks (0-1) to hold on to a 20-12 victory.

“We have a lot of work to do but we really needed the win,” said Mariners Head Coach Adam Guerra. “We let a lot of opportunities in the passing game get by us and we couldn’t capitalize on that so we had to put a lot of work on Kevin. Defensively they were able to make passes on us even though the secondary is one of our strengths.”

Kicker Sammy Saldibar was the first of the Mariners to add points to the board with his 30-yard field goal that was a “nice long one,” according to Guerra, and by the end of the game he had eight points that included two field goals and two extra points and this proved to give the Mariners the edge in the game.

Holubowski set the mood for the Mariners offensive ground game early springing a 50-yard touchdown in the first quarter and continued to rush hard throughout the game punishing the Sharks defense with his aggressive rushing style.

Mariners wide receiver Zachary Llorens tacked on six more points in the first quarter after catching a 17-yard pass from Luke Cain to make the game 17-0.

But the defense of the Sharks soon had the Mariners number and became unwilling to allow any more points in the red zone in the quarters that followed.

Malibu High School’s offense came alive in the second quarter when quarterback Chase Gardella connected with wide receiver Apollo Luna for a 94-yard touchdown to put the game at 17-6 for the half.

During the second half, the Sharks offense changed strategies and gave up on their non-existent rushing game attempting a comeback by going to the air.

Gardella began to pick apart the Mariners secondary until he found wide receiver Dylan Miller wide open in the fourth quarter for another touchdown.

But in the end, it was the Mariners defense that held on for the win just when the offensive game seemed to shift gears for the Sharks.

The Mariners play their next game away at Mary Star High School on Daniels Field starting at 7:00 p.m.