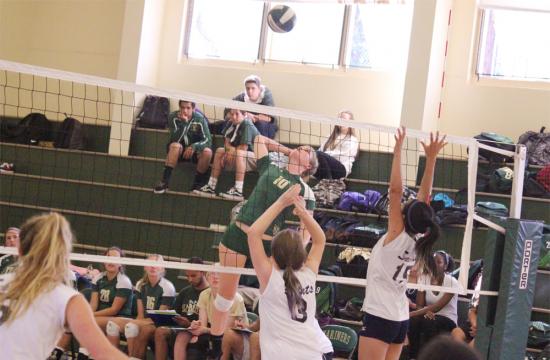 St. Monica High School (5-0) blew past Lighthouse Christian (2-6) in three straight sets 25-13, 25-8, and 25-15 with first year transfer Dominique Booth stealing the show with her numerous kills against the Saints throughout the home game on Thursday.

Brenda Gonzalez, Head Coach of the Mariners Women’s Volleyball Team, thinks that the Mariners are very strong this year.

“I think everybody did well this game,” said Gonzalez. “Especially, our middle D’Arcy Gray and Kamari Howard. And our libero Blake Springer did well, definitely we couldn’t do anything without her.”

Gonzalez thinks that Booth is having a good year even though this year is her first with the Mariners.

“Dominique has been doing well this year,” said Gonzalez. “She’s definitely our go to hitter and she has been a great leader out on the court. It’s exciting to have her.”

Jaime Jimenez, Volleyball Head Coach for Lighthouse Christian, thought the game was a little shaky for the Saints.

“This is the first time that we have played a team of this caliber,” said Jimenez. “Our girls are not as experienced so that could have played a big role in the mismatch. They were a little timid and a little scared. We are a team that only has two seniors.”

Lighthouse Christian plays Wildwood Wednesday at home next week at 2:30 p.m. and away at New Roads Thursday at 2:30 p.m.

The Mariners play San Bernardino at home Tuesday at 6:00 p.m.