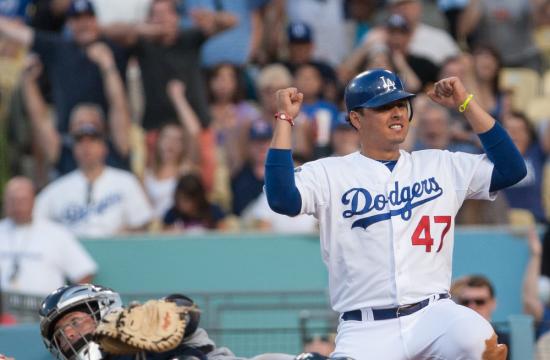 Think Cure! The official charity of the Los Angeles Dodgers, held a massive fundraising effort designed to raise hundreds of thousands of dollars by auctioning Dodger memorabilia in order to help fund cancer research at the City of Hope and the Children’s Hospital of Los Angeles Labor Day weekend.

The Dodgers won on Monday against the Padres 4-3 in a riveting 11-inning game that succeeded in bringing together two of baseball’s finest sports teams struggling in intense competition that culminated with the mobbing of Dodger A. J. Ellis by his team mates after a walk-off single to give the Dodgers the game.

Prior to the game, a special “Kids Take the Field” event that included the players, and Dodgers owner and former Lakers basketball star Ervin “Magic” Johnson, who took a moment from their busy sports schedules to give the children on the field the opportunity to meet, greet, and sign autographs on baseballs in front of a crowd of thousands.

Brainchild Stuart Siegel, M.D., Director of the Children’s Center for Cancer and Blood Diseases at Children’s Hospital Los Angeles along with Stephen Forman, M.D. of the City of Hope were also present and the pair led a team of doctors and children who could be seen smiling before, during, and after the game.

According to Siegel, cancer is the number one disease killer of children In the United States and even though there are only 12,500 new cases a year, this can make children who have cancer feel alone.

Some of the money raised at the Dodgers game will help children suffering from cancer in the City of Santa Monica.

“We at Children’s Hospital of Los Angeles have many patients in the Santa Monica area and the Westside,” said Siegel. “Through our research, we have helped kids in Santa Monica. But more then that, our research is really geared to make strides to help children everywhere.”

Years ago Siegel and Forman had an idea to bring together two premier cancer institutions and collaborate on research.

“We were so taken by the original concepts of Think Cure!” said Siegel. “The idea was to try and take two of the premier pediatric cancer institutions in the country and try to bring them together to develop joint research programs.”

The pair saw the potential of starting new ideas that would be both exciting and include new approaches started with seed money, and at the same time fund projects that would bring researchers of both institutions together.

“We knew that there were areas of common interest that were not being explored,” said Siegel.

Today ThinkCure! helps children not only in Santa Monica and Los Angeles, but also contributes to the growing knowledge about the disease of cancer in all those affected around the world.

Siegel believes he has made a difference in searching for the cure for cancer especially in the field of “leukemias and lymphomas,” two of the most common forms of cancer.

“We feel like we have really invested the money well,” said Siegel. “We have been able to develop great ideas that are now being invested in extensively by major funders of cancer research in this country.”