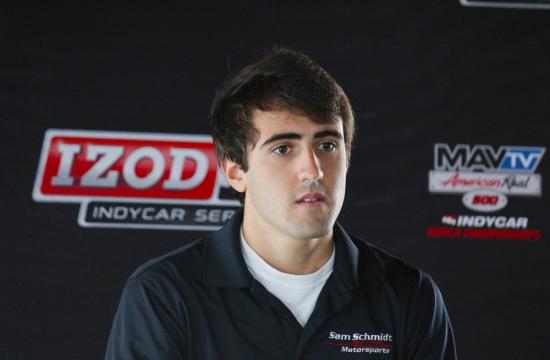 “I say Trois Rivieres was really a turning point to get back into the title chase,” said Vautier. “There was a lot of pressure there.”

Vautier had won the Grand Prix of Trois Rivieres leading 52 laps and placing first with a time of 59:09 to add three to his number of his first place event titles in the 2012 season and this proved to give him the edge over Guerrieri in the Auto Club Speedway Championship race.

Munoz timed 37:38 on the Auto Club track grabbing the advantage early setting the pace for the other drivers in the 100 mile race and took the lead with Vautier and Guerrieri nose to tail fighting to stay in second and third place.

Jorge Gancalvez, who had qualified in the fourth position, crashed his car into the retaining wall and was forced to exit the race.

David Ostella moved up throughout the race eventually placing second only five tenths of a second behind Munoz in the Auto Club Speedway race.

But the title race was between Vautier and Guerrieri who were fighting for the Firestone Indy Lights 2012 season crown, respect, and money.

At stake for Vautier and Guerrieri was a million dollar award to fund their future careers as IndyCar open-wheel racers and neither contender, regardless of the fact that they were team mates of Sam Schmidt Motorsports, gave each other a lot of room during the race.

Vautier took the shorter line down the D-shaped oval speedway and held that position for the majority of the race, and did work to challenge Munoz down the straightaway going high in the middle of the race but eventually decided to place a safe fourth with a time of 37:45.

In turn 22, Guerrieri danced to the high part of the track and overtook Vautier taking the second spot before scoring third with a time of 37:41, but the 279 points he was awarded throughout the season did not beat Vautier’s 283 total points.

Vautier took home the Firestone IndyCup 2012 prize and the championship title with his fourth place finish in the Auto Club Speedway race.