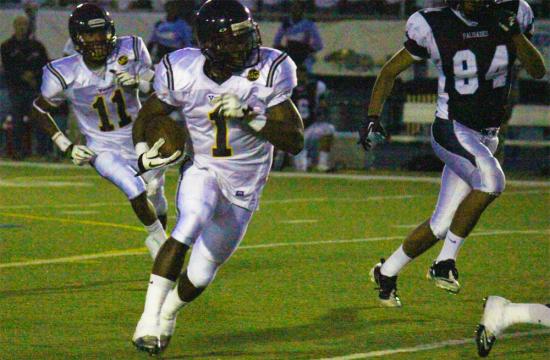 Santa Monica High School (2-0) dominated both sides of the ball blowing out the Palisades Charter High School Dolphins (1-1) 53-12 with junior running back Will Taylor stealing the show and racking up three touchdowns to lead the Vikings to victory.

It was an uphill battle for the Dolphins soon after the first snap and by the end of the second quarter the Vikings lead had run away 43-6.

Defensive back Sebastian LaRue returned an interception for 45 yards in the second quarter to follow Matthew Rusk-Kosa’s five-yard touchdown reception in the previous drive, and Taylor made rushing look easy scoring another touchdown soon after.

Taylor’s third touchdown came late in the third quarter when he ran half the length of the football field to put the Vikings up 43-6.

“I saw a gap on the left and cut it up as soon as I got it and it was off to the races,” said Taylor.

“Taylor is running back, wide receiver, and a cornerback, he does it all for us,” said Clark. “I knew he was ready to go tonight and he went out there and he performed well. Will Taylor is a heck of a football player and he can play.”

Taylor showed just how good he was bouncing back even after he was pulled by Clark for most of the third quarter due to an unsportsmanlike penalty.

Clark rationalized benching Taylor for most of the third quarter.

“He would have had at least 200 yards but I pulled him for a quarter,” said Clark. “They always call the penalty on the second guy and I can’t handle penalties. But Taylor apologized so I let him go back out there.”

Taylor thought his breakout performance against the Dolphins went well even though he didn’t play the entire game.

The defensive line of the Vikings held strong with defensive tackles Tim Darby and Pete Breceda manhandling their counterparts effectively neutralizing the wishbone offense of the Dolphins that scored 45 points against the Poly High School Parrots last week.

Both the Vikings and the Monarchs will face each other undefeated in the 2012 football season.

“I think they are real confident in what they do and they have a right to be,” said Clark about Mater Dei. “They got a great team. Their offensive line is bigger then we are and their defensive line is bigger then we are. I’m not going to lie to my kids, it’s an uphill battle, a real David versus Goliath, but David slayed him so we are going to go out there and try to take the victory.”

Vikings next game is away at the Santa Ana Bowl versus Mater Dei Thursday, Sept. 13 at 7:00 p.m.