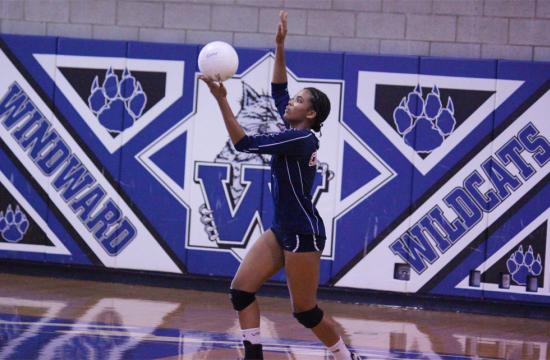 Crossroads Women’s Volleyball (3-7) is in a slump with the Roadrunners losing to the Windward Wildcats (6-3) in three straight sets 25-7, 25-5, 25-16 while playing away at Windward Thursday.

Windward advances to 3-1 in the Alpha league while Crossroads falls to 0-3.

Roadrunners Head Coach David Crist thought that his team was in a rough spot in terms of wins to losses.

“We had a few games that we could have pulled away, but in terms of today at Windward I felt that the score didn’t represent how well our girls played,” said Crist. “We had a lot of long rallies and battled and the third game score represented that a little more fully. But Windward is a great team and you look at them and see it, so we were just glad to come out and compete.”

Michelle McGuire, Head Coach of the Windward Women’s Volleyball team, thought that the Wildcats played well against the Roadrunners.

“Our ball control and passing were strong today,” said McGuire. “We were able to utilize our three big hitters.”

McGuire singled out Tae Butler, Christina Cornelius, and Asha Walker as factors in the win against the Roadrunners.

“We were able to get them the ball because our passing was in system which has been a goal for the past five weeks,” said McGuire. “We had an opportunity to get everybody in and give our starting setter some rest after the first game, so it worked out really well.”

Crossroads will get one more chance to beat Windward at home on October 23.

Windward plays away at Laguna Blanca at noon Saturday and away against Brentwood School Monday at 5 p.m.

Crossroads plays their next game against Milkan at home Monday at 5 p.m.