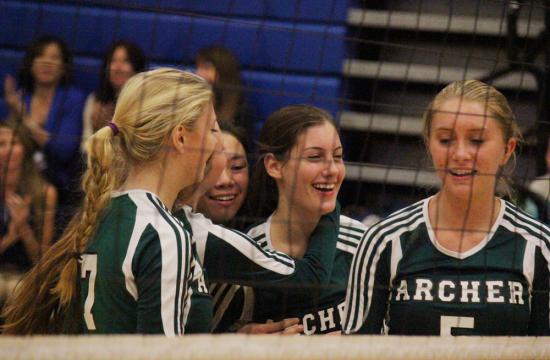 The Panthers are now 9-1 in league play with their only loss to Milkin earlier in the season avenged Wednesday, Oct. 31.

Archer Volleyball Head Coach Jonathan Lotz was proud of the performance of the Panthers previous week performance with wins over Calvary Chapel and Pacific Hills, and with the recent win over Milkin, the Panthers have solidified their top spot in the competitive Delphic League.

“We beat Milken in four sets to avenge our early season loss to them and solidify our place at the top of the league,” said Lotz.

“Our sophomores led the way this time,” said Lotz. “Outside hitter Ava Mandelbaum and opposite hitter Lauryn Brame each notching 10 kills to carry us to the win.”

“The win against Calvary Chapel was one of the more inspiring wins I’ve seen in my eight years of coaching,” said Lotz. “Every point felt like match point, and it’s a shame somebody had to lose, but with the two wins, it locked up the Delphic League title for us. This will hopefully give us even more momentum heading into the playoffs.”

The last time these two teams met this season, the Panthers won 3-0.

“Teams just don’t come back from those kinds of deficits in volleyball,” said Lotz. “But somehow this group of girls, who wear their hearts on their sleeves and never, never give up and fought back with Lindsey Levesque serving seven points in a row to seal the win 26-24.”

The CIF playoffs look good for Archer that should be hosting their first round game at 7 P.M. at SMC on Nov. 6, but according to Lotz “nothing is 100% definite until the draws come out.”

“There’s a chance we could be on the road for our first match but I doubt it since we should be one of the top seeded teams,” said Lotz. ” Looking ahead, I think our girls are primed and ready to go in playoffs. Our players are improving match to match, and we know that with our tenacious defense and heavy hitters, we can match up with anybody in the division. This will help us to hopefully make a deep run in the post-season.”

The Panthers will start the CIF Division 4A playoffs as the top seed of the Delphic League.