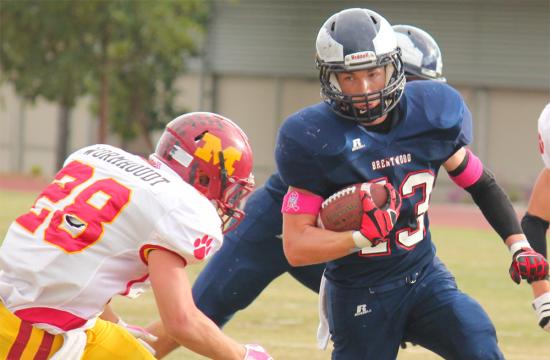 The Brentwood High School Eagles (6-1-0) took down the Mammoth High School Huskies (1-6-0) to advance 3-1 in the Alpha League in a impressive display of dominance winning the game 48-16 at home Friday afternoon Oct. 12.

Brentwood’s first scoring strike came from running back Jared Ashkar who scored an 18 yard rushing touchdown to put the Eagles up 7-0 in the first quarter.

In the second quarter, Brentwood running back Tristan Barbanel scored on a four yard sweep to the right to put the Eagles up 14-0.

Huskies running back Tyler Wormhoudt responded scoring on a 65 yard rushing touchdown to make the game 14-6 before a botched extra point.

Quarterback Connor Boggs scored the third touchdown of the first half for the Eagles on a six yard quarterback keeper to give the Eagles a 21-6 lead at the half.

On the opening kickoff of the third quarter, Etienne Tremblay ran back the kick for 91 yards to put the game at 28-6.

Wormhoudt responded scoring two more rushing touchdowns against the Eagles in the second half, but the defense of the Huskies flopped allowing a final tally of 46 points to end the game 46-18.

The Eagles have beaten local non conference teams Windward 9-7 and St. Monica 28-14 during the 2012 season with their only loss against league rival Viewpoint (2-5-0) and they currently hold third place in the Southern Section Division Mid Valley (XI) Football standings.

The Eagles are gearing up to play against the top two Alpha league teams Paraclete (6-1) and top seeded Sierra Canyon (7-0) before the playoffs begin after a non league match-up against Marantha Christian away on Nov 2.

Next game for the Eagles is home against Paraclete at 3:30 p.m.