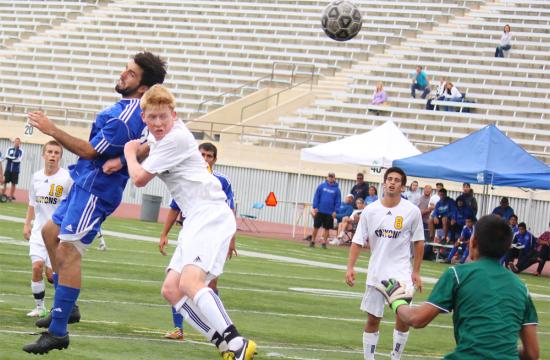 Santa Monica College (7-3-2) defeated College of the Canyons (2-5-5) 2-0 in a defensive stalemate that was snapped when forward Alesandro Canale scored the first goal of the game on a backwards header against goalkeeper Hector Leon during the second half of play Tuesday afternoon.

Forward Rafael Silva of the Corsairs sprang to life and scored the second goal of the game minutes after Canale to put the final score at 2-0.

“It feels great,” said Pierce. “We are working hard and we had a few injuries but we knew we were going to bounce back.”

Piece attributed the win to a penalty flag that wasn’t called and excited the Corsairs.

“I think they got fired up after we got in on them one play,” said Pierce. “There was a penalty kick that was arguable that wasn’t called and I think that fired our forwards up a little bit to go up and get a goal.”

Canale was given a yellow card for arguing with the referee after he had been pushed to the ground by Canyons Renato Sanchez while attempting a shot on Leon.

“I got tackled in the box and I thought it was a PK but the referee said I dove,” said Canale.

Canale scored minutes later after being pulled by Pierce for getting a yellow card.

“I just gotten pulled out by the coach,” said Canale. “But when we started picking a play I told the coach ‘I need to go in now’ and so he sent me back in. It took me coming off to see how we were playing and got me fired up to go back out there.”

Canale was later clearly held by midfielder Carlos Palacios and then tripped up by defender Kirk Mancia but Canale kept his cool silently setting up his penalty shot while the Canyons defenders protested and Mancia received a yellow card.

Pierce said the object of this game was to display a strong defense and score goals.

“We’ve been getting scored on a lot lately so we are trying to get numbers back up behind the ball and defend as a team and that’s what we did today,” said Pierce. “We knew we were going to be able to pick them off and get a goal eventually but we wanted to keep a clean sheet and keep the shut out for our guys.”

Next game for the Corsairs is at home Friday against Oxnard at 3:00 p.m.