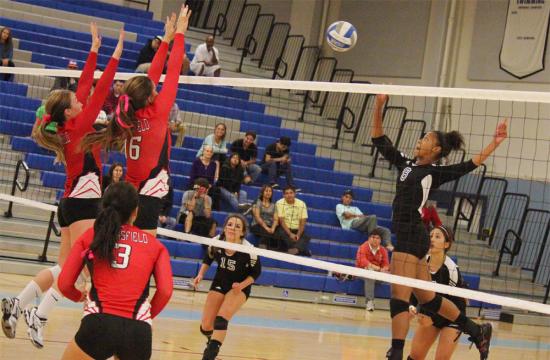 The Santa Monica College (5-10) women’s volleyball team lost to Bakersfield college 25-20, 25-18, and 25-22, but the loss felt more like a victory for the Corsairs who scored five unanswered points in the final set to end the league game at home Friday night.

Santa Monica College Volleyball Head Coach Nicole Ryan was proud of her team’s performance even though they lost to the Renegades who are currently ranked number seven in the state in junior college volleyball.

“Maybe we didn’t actually win but for us to battle like that with them, I think we did really well,” said Ryan. “I am really pleased with our progress.”

Ryan stated that she never knows what to expect from her team and that the season “feels like a game of whac-a-mole.”

Ryan singled out sophomores Angie Rinaldi and Ilyn Butac as having a good night against Bakersfield as well as pointing out that her team is made up of mostly freshmen.

“Overall, I am pleased with the way we battled and that we didn’t give up in the end,” said Ryan. “We’ve shown that we are maturing as volleyball players and at the end of the day win or lose they put it all out on the floor today.”